A new way of gettin' my creative on 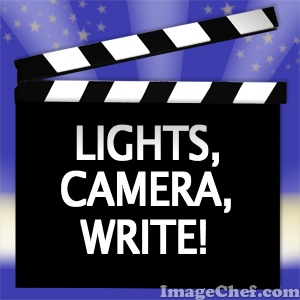 For the past few months I have been exercising my writing muscles over at Trifecta. I liked it when they gave out prompts and required we write a prescribed number of words by a certain date. But lately they have been waaaaaay more flexible ("take weeks and weeks to write whatever you want in as many words as you feel") and that just doesn't appeal to me. That feels like Nanowrimo. (Of course, just as I get bristly when someone gives me pipe about what I write on my blog, I fully respect the Trifectans' right to run their writing competition in anyway they damn well please.)

So what's a Gal to do? I like the busman's holiday of writing that I don't get paid for.

Fortunately, a whole new world of blogging has opened up to me. BLOGATHONS! Movie blogathons! I love writing about movies, and I love reading the works of other fans who are passionate about their cinema favorites, so I'm very excited about joining this community.

First up is the TCM Summer Under the Stars Blogathon hosted by Jill and Michael. It's a cool idea inspired by Turner Classic's tradition of devoting each day in August to a different star. The choices we have to write about are daunting because I adore Myrna Loy, and Marilyn Monroe, and of course, the Great Kate herself. But then I was excited to see, smack dab in the middle of some of the brightest stars in movie history, Elvis! I know most of his movies suck, but that's not because he was a bad actor. It's because he allowed himself to be managed by greedy piranhas who ... OOPS! Better save that for my own blogathon post.

Next is the What A Character Blogathon hosted by Kellee, Paula and Aurora. Also inspired by Turner Classic Movies, it gives me an opportunity to pay tribute to a great character actor who has enhanced great films but never starred. I chose Gail Patrick, who not only appeared in some really terrific movies, she also went on to produce the old Perry Mason TV show.

Finally there's the Paramount Centennial Blogathon hosted by The Hollywood Revue. One of the great old studios is celebrating a big birthday this year, and I've chosen one of focus on one of their lesser known films, This Property is Condemned. I'm developing a spin to the story of how this movie that got made, and what makes it significant, that I hope will be engaging.

That'll take me through the end of September. I'm excited by my creative "assignments."