1) This song was inspired by a young Ellie Goulding's fear of the dark. What scared you when you were a kid?Clowns. The summer when I was 7, we took a train ride to Washington DC. It was overnight, and the train had a "theater" car: folding chairs pointed at a screen. The movie was The Greatest Show on Earth. In it, Jimmy Stewart plays Buttons, who is really a doctor who ran away to join the circus to evade police. He committed euthanasia, put his beloved wife out of her misery. During the movie, he steps up and saves lives, even though it reveals his true identity and sets him up for arrest and the death penalty. I know now that Buttons was a hero. But when I was 7, there were plot points I didn't understand and all I knew is, here was a murderer hiding behind his pointy "I killed my wife" smile. It  terrified me to consider what other clowns were hiding! PS It always amused my mom that I am possibly the only person in the world who grew up afraid of Jimmy Stewart, aka George Bailey from It's a Wonderful Life.
2) She thinks back to the room where her brother and sister slept and she felt safe. Did you share a room when you were growing up? Nope.

3) Ellie Goulding grew up in public housing and worked her way through the University of Kent in Canterbury. Back in those days, her favorite job was theater usher because it offered her the perk of seeing plays for free. What's the most recent "freebie" you scored? (This includes a buy one/get one deal, extra points on your credit card, etc.)
Free shipping from Walmart.com.

4) Even though today she is an international music star, Ellie still lives modestly. She describes herself as "still in university mode," and limits herself to $10/day for lunch. Where do you economize?
I love my CVS coupons. Just today I saved 27% off my bill with coupons.


5) Ellie has proclaimed herself "a cat lady" and often posts pictures of her cats to her Instagram account. What's the most recent photo you took?
Yes, it's a trash bag full of leaves. I cut back my massive philodendron for the first time in more than a year. She'd been my office plant, and I wanted to show my coworkers that I'd finally given her "a haircut," as they'd all recommended. 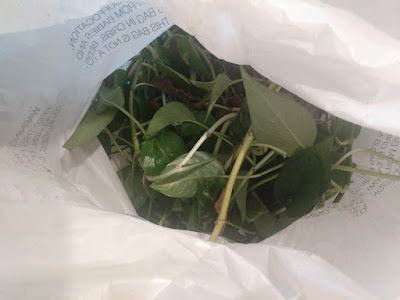 6) Ellie appeared on Sesame Street. She, Elmo and Abby thanked clouds for raindrops, lakes, and the water we drink. Would you be thankful for a little rain this weekend?
No. I don't really like rainy days. I believe the world should be like Camelot, where it never rains until after sundown.

7) In 2011, the year "Lights" was a hit, Prince William married Kate Middleton. Ellie not only attended the wedding, she sang Elton John's "Your Song" for the couple's first dance. Tell us a song that reminds you of a romance in your life.

8) Also in 2011, AT&T abandoned their attempt to buy T-Mobile. Which company is your cell phone carrier? Are you happy with them?

Consumer Cellular, and yes. I talked my friend John into switching, and he's happy with them, too. It was a battle, though, because he thinks using Consumer Cellular makes him "old." Guess what, John, we ARE old!

9) Random question: What recent experience made you feel old?

I suppose I could say switching to Consumer Cellular, but it wasn't that. I have a new boss who is between the ages of 35 and 45. I made an I Love Lucy reference (I said I felt like Lucy on the conveyor belt in the chocolate factory) and he had no idea what I was talking about.

Two of my closest friends have been to the doctor this week. Our conversations make me feel like a character from General Hospital.

•  Henry had his first appointment with the new neurologist. This neurologist is so new he didn't even she existed. The County, his employers, insisted that he see her. Now. Henry has been clashing more and more frequently with his library coworkers and the public and my guess is that they need some proof that he is disabled to keep him on. He and Reg went to the appointment and Henry raved. He "loved" her. He feels confident that now he has a neurologist he can turn to and who can help him. This is HUGE, because Henry has been resisting seeing a specialist for two years now. I am hopeful that this doctor is bringing Henry that much closer to embracing the fact that he has a TBI and that he needs help if his progress is to continue.

Of course, Henry being Henry, there's a dark cloud amidst this silver lining. He is furious that the County made him see her. He says she is angry about this, and so is the internist who has been treating him. I doubt that that's true. She's a neurologist and he needs her help. (And I bet the internist is delighted to not have to treat his TBI anymore!) He wants to call me again over the weekend to discuss this further. I may not pick up. This is good news, a positive step forward, and I don't want him getting whipped up over the perceived unfairness of the County dictating that he see a specialist.

•  My oldest friend had Botox. In her bladder. Doctors have been recommending this to her for years. She's been resistant because she doesn't want to be shot up "with poison." However she developed a bladder infection that was resistant to treatment and made her so ill that last month she had to have surgery. The urologist who performed that procedure convinced her that, if she didn't want to keep having debilitating infections, she needs to give Botox a try. 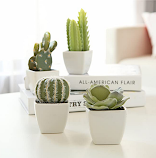 The doctor told her yesterday's procedure was a success, but she's still uncomfortable today. Crampy and tired. So I'm glad these little cacti just arrived. First of all, they're fake, which is a bonus. She has two cats in a very small "mother-in-law apartment" in her cousin's home. I was afraid that, if I sent her real flowers or a plant, her cats would knock them over or view them as a salad bar. Also, I didn't want her to have to find a vase or change the water.

The good news in all this is that they're both going to be feeling better as a result of these trips to the doctor. They're both good people, and they deserve to enjoy comfortable, worry-free days.