1) This song is a toast. Have you ever performed an official toast (at a wedding, a graduation, a retirement party, etc.)? No, THANK GOODNESS! For all the times I've been a bridesmaid, I am happy to report I escaped being Maid of Honor, which means no bride ever called on me for a toast.

2) According to Maroon 5 lead singer Adam Levine, this is a "toast to the ones here today." Tell us about someone in your life that you're especially grateful for. My cousin Rose. She is one of two (just 2!) people left in the world who held me as a baby. She has loved me my whole life. Though we frequently exasperate each other, I am very grateful she's in my life.

3) Levine is the song's composer. He said he was compelled to write it, to help him cope with the death of a friend. His lyrics acknowledge that "everybody hurts sometimes." What advice would you share with someone who is struggling? Share. With your blog, with your friends, with God. Work through your pain by examining it and sharing it.

4) Adam Levine was one of the original judges on The Voice. Are you a fan of the show? Nope. I don't know why I've never gotten into it the way I have American Idol, but I just haven't.

5) Among his friends, Adam is known to be an excellent Scrabble player. Is there a game you're particularly good at (or you especially enjoy)? I'm a streaky but sometimes awesome canasta player.

6) Though he's a multi-Grammy winner, Adam wasn't always successful. In fact, he was fired after just three hours at his first job as a waiter. Have you ever had a job that just wasn't a good fit? I was a secretary for five years. I was good enough at it, I suppose, but I was miserable.

7) In 2019, when this song was released, Joaquin Phoenix gave his Oscar-winning performance in Joker. Heath Ledger also won an Oscar for is portrayal of the same character in a different film, and Cesar Romero was The Joker on TV. Today The Batman is doing great business at the box office. Do you have a favorite super hero, or arch villain? I know comic book purists disagree, but I love Adam West's Batman. I could (and have) binged on it for hours. 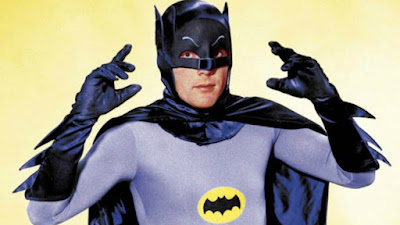 8) Also in 2019, two familiar names had books on NY Times best seller list: John Grisham with The Guardians and Janet Evanovich with Twisted Twenty Six. Are either of these authors among your favorites? Nope. I used to love Grisham, but we've grown apart, John and I. I read One for the Money and loathed it. Fortunately for both Grisham and Evanovich, my response to them hasn't stood in the way of their success.

9) Random Question: What's something you wish you'd figured out earlier? #3. I read Saving Graces by Elizabeth Edwards and it had a profound effect on me. Sometimes being vulnerable, sharing your pain, and allowing a friend to help you makes you both stronger.