Guess what! Go ahead, guess! 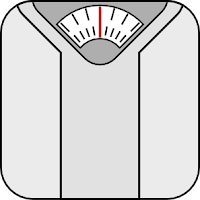 I got on the scale and have discovered that I have NOT GAINED A POUND in the last month! Now I know that doesn't sound like much -- and believe me, I wish I could tell you that I have lost at least one pound -- but I was gaining a lb./month when I was on taking my full dose of Lexapro! I'm just weaning myself off, because cold turkey is dangerous and stupid, but I am hopeful that when I am done with the medication, I will see real weight loss, as well.
Posted by The Gal Herself at 6/14/2011 07:34:00 AM 2 comments:

Watching the GOP debate in NH, I find him more respectful and statesmanlike and less divisive than many on the stage -- including Gingrich, Bachman, and Santorum. Even Pawlenty. I would enjoy hearing Romney debate the President, because I think the distinction would be clear and impersonal, and I might learn something.

Which is not to say I'd ever vote for Mitt Romney. I'm pro-choice and not displeased with Illinois' favorite son, Barack Obama.

And then there's Seamus (shown). Doesn't he look like a grand boy? To be fair, Mitt's wife, Ann, maintains Seamus loved his travel kennel and lived to a ripe old age. But I still can't seem get around tying a kennel to the roof of a car.