Saturday 9: Happy Holidays! (from the archives)

1. As you can see, Sam loved giving her annual wish list to Santa. Yet some children are

reluctant to climb into Jolly Old St. Nick's lap. Did you enjoy the tradition or were you shy? Or did you by pass it altogether -- either because you wrote him a letter or because your family didn't celebrate Christmas? When I was a little girl, we had a mailbox like this at home and I would have preferred to leave my letter for Santa inside. But my mom got such a kick out of seeing us with Santa that we did that instead. I never enjoyed it -- I felt awkward and shy with the old gent -- but it felt like my job as her daughter.

2. Are you currently on the Naughty or Nice list? How did you get there? I think I'm on the Nice side of the ledger. I wouldn't say I'm 100% Nice, but I'm working on it. And I believe that, in this category, effort counts.

3. Did you ship any gifts to friends and family this year? If so, which one traveled the farthest? My gift to my oldest friend went from Chicago to Beverly Hills, 2028 miles. It's a 5x7 of her and me in our plush white terry robes, awaiting our spa treatments in Las Vegas last month. I added a Starbucks gift card for good measure.

4. Did you buy yourself a gift this year? I'm very generous with myself.

5. What's your favorite holiday-themed movie? Have you seen it yet this year? My favorite is Mr. Magoo's Christmas Carol. I haven't seen it yet, but I will. I think I'll take it with me to enjoy during my layover in ATL.


6. Thinking of movies, Christmas is lucrative for Hollywood. Have you ever gone to a movie theater on Christmas Day? Nope.

7. Have you ever suffered an embarrassing moment at the company Christmas party? Yes. Let us say no more.

9. Share a memory from last Christmas. Proudly wearing my Cubs 2016 WORLD SERIES CHAMPION gear, and gifting my expatriate friends with Cubbie championship caps. It was glorious!

As I head into Christmas, I have two close friends on my mind.

Henry, oh, Henry. My friend in Key West is so dear, so loving. And such a fucking flake. While I have no doubt that I'll be welcome when I arrive down there, and that he will be happy to see me, he's not making this trip easy. For ever since last summer, he only sporadically checks email. He simply doesn't "like it anymore." His Mac died, and he inherited his friend Ted's PC, and he just doesn't care for the platform. Likewise, he doesn't "like" Facebook or Twitter. He works ever-changing hours at the library (some days, some evenings), so it's hard for us to coordinate in real time. His preferred form of communication is text message, but some messages -- like my upcoming itinerary! -- are too long and complicated for texts. It's been nerve wracking to make sure he gets my info so he can be there tomorrow to meet my plane!

My oldest friend. She didn't get the job she was so counting on and now will be moving to a small town in the mountains to live with her cousin. She sent me the most plaintive email yesterday, referring to herself as unemployable because she's "old and fat." She sounded so hopeless. So I called her. She didn't pick up. I left a message. She didn't return it. She did send me an email later that night. But shit! She's scaring me.

I'm glad she's moving in with her cousin. It will be good to know that she's under the watchful eye of someone who not only loves her, but understands what's going on with her health. And I wish she realized how very lucky she is to have a cousin with an "in-law's" apartment in her home, just waiting for her to move in. I wish I had such a resource I could lean on!

Most of all, I wish she wouldn't reach out and then retract back into her unhappy shell like a tortoise. I hate how helpless it makes me feel. But I must be patient with her. She's struggling with a lot and doing the best she can.

And it's Christmas. She's spending it with the family she moved 2000 miles to be with. There has to be some joy in that for her, right?

My Little Lion in Winter 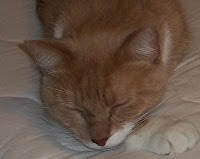 Reynaldo is getting old. He's 13.5 years old, which is about 70 in human years. Looking back on our time together, I can see time and age have slowed him down.

He's more mellow. He no longer views my sleeping as neglect. Now at night, I find him curled up beside me in bed. It's very sweet.

His senses of sight and smell appear to be a bit dulled. Sometimes he insists his dish is empty when he's just pushed the kibble to the rim with his nose. All I have to do is shake the bowl for him and he's happy again.

He's given up on his battle against framed artwork. He used to sit under the pictures on the wall, howling at them, now and again slipping a paw under them to knock them down. No more. It must be noted, however, that I no longer even bother displaying family pictures around the living room. He has knocked them over so often that the frames are broken. And I have no doubt that if I took them out again, he'd instantly resume his assault.

He has no obvious health problems, but at this age he should go to the vet every six months. I just made an appointment for him next week. I guess this hammers it home for me to accept that our time together is shorter. Yes, he's healthy now, but statistically speaking, indoor cats live between 12 and 18 years. My dear old Joe made it to 19 or 20, but that's unusual. So while Rey's racing around as I write this, making little noises and either fleeing or pursuing an imaginary adversary, he is an old man.

He's taught me a lot over our time together. I'm more patient for knowing him. I've come to accept him as he is, even as I believe he still has serious gripes with me. But I know I've given him a good life, and there's no question that he loves me.

He enriched my life when he entered it, back in November 2004. He's less a pet and more a companion. I'm glad we're together.