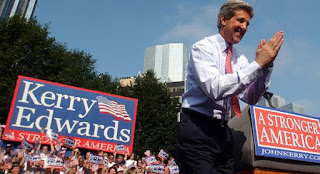 I've referenced this a time or two -- back in 2004, I worked on John Kerry's Presidential campaign. From February through November, I stuffed envelopes,* answered phones, wrote letters, attended rallies, made calls, checked and rechecked paperwork† and basically did whatever was asked of me.

How I believed in that man! (Still do.) How certain I was that he was a vastly superior choice to George W. Bush! (Still am.)

I brought more experience than the average volunteer because I'd worked on both Clinton-Gore campaigns. I didn't bring the same zeal to my days as a Clintonista as I did to the Kerry campaign, though. Because in 2004, we were at war and I knew deep in my marrow that John Kerry would be a wiser, more scrupulous commander in chief. The scandal of Abu Gharib rocked me to my core. John Kerry would not preside over human rights violations.

When that campaign didn't end as I wished, I was shattered. To this day, nothing -- no single event in my entire life -- has ever frightened and wounded me like that loss. Because it was so inexplicable and, I feared, catastrophic. How could my fellow Americans get it so wrong? What was wrong with us?

What was wrong with me? Could I have done more? Done better? Contributed more money? Put in more hours?

I helped let John Kerry down. I helped let my country down. I helped re-elect the man who went on to preside over the debacle of Hurricanes Katrina and Wilma. I realize now that was a silly and unproductive way to think. But that's the dark hole I was in. I literally cried every morning -- in the tub, with my tears mixing with the shower spray -- for two months. From November 3, 2004, all the way into the New Year.

It wasn't until I was in Key West with my dear friends that I started to heal. They introduced me, at every holiday party, as "The Gal who worked on the Kerry Campaign. We're so proud of her." Strangers instantly became friends who hugged me and thanked me. And made me feel a little proud of my contribution and less ashamed of my failure. Then I felt free to pray for George W. Bush and my country and get on with finding other ways to advance the liberal agenda.

So why I am resurrecting this old hurt? Because as I've been watching the DNC 2016, I am befuddled. Even offended.

They booed during the DNC opening prayer, they staged a walk out and did a handful of other childish, self-destructive things. Wah-wah. Get over yourselves. Am I really supposed to believe that Hillary Clinton is farther away from Bernie Sanders than George W. Bush is from John Kerry? Did Hillary Clinton do anything to Bernie Sanders as bad as the "swift boating" John Kerry endured? We haven't got time for this shit, you brats. The GOP nominated Donald Fucking Trump, for pity's sake!

So they reacted out of a shocking level of self involvement. Ok. They're young. Maybe they've never had their hearts broken before. That isn't what shocked me.

I still can't believe they booed Bernie! I now question the sincerity and degree of their belief in their man. Do they truly think this is harder on them than it is on him? He began a campaign that was regarded as an empty protest and ended up with over 40% of the delegates. Don't they get how hard it must be to come so far and so close and then have to endorse his opponent? How could they be so disrespectful of his sacrifice and his hurt?

I end this post with a quote from Bernie Sanders himself:

*The internet was still rather young back then and snail-mail was the preferred method of communication.