Tomorrow is June 1. I return to The Daily Plate and go back to tracking calories and exercise. And that means that my first Dark Chocolate Peanut Butter Cup will also have to be my last for awhile.
Posted by The Gal Herself at 5/31/2010 06:55:00 PM 3 comments:

What was so great about October 2009? I don't know, either, yet for some reason I hung onto a lot of unused bank solicitations that all expired then. Welcome to shredder, bank solicitations! I also recycled dozens of train and bus schedules that were either expired or duplicates. It didn't make a big difference to the way this place looks, but it was a good use of my time -- spent watching the ball game, anyway -- and as I ran the bag of papers down to recycling bin I felt as though I'd accomplished something.

This week's movie topic is all about Soldiers ...
Share your soldierly choices, linking back here at the Bumbles. 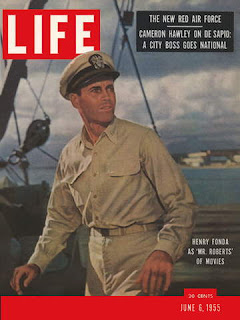 Mr. Roberts. Henry Fonda stars in a movie that is known as a comedy but breaks my heart every time I see it. Doug Roberts is assigned to a cargo ship in the Pacific during WWII. He longs to see real action, to get into the fight, and keeps requesting transfers. The commanding officer (played by James Cagney) selfishly refuses to approve his requests because he realizes all the commendations he receives are really because of Roberts' talents and leadership ability. What we understand is that Roberts is already a hero, right there where he is on the cargo ship. If he doesn't do his job well, the soldiers at the front won't have what they need to wage war. "They also serve who stand and wait." Roberts may not be fighting the Japanese but he's fighting for his crew, making sure they toil away in appropriate conditions so that that their productivity and morale stay high. Roberts does his thankless job with humor and integrity. At one point, near the end of the movie, his crew finally appreciates the full measure of his quiet heroism and they salute him, one by one, sailor after sailor, saying, "Good Night, Mr. Roberts." And this old Gal chokes up every time.

Emmett Smith -- In Country. Bruce Willis is a revelation in his best movie role (and it should be noted that I love just about everything Bruce does). He's a Viet Nam vet who went home to Kentucky after the war. Suffering from post-traumatic-stress-syndrome, he just sits around the house and smokes pot all day, socializing with a small crew of fellow vets. He is supervising -- and lavishing love on -- his teenage niece, Samantha, the daughter of his brother, who died in Nam before his daughter was born. Emmett and his buds don't talk about their heroics "in country" very often because they don't consider themselves heroes. But when, at the end of the movie, Emmett and Samantha visit the Viet Nam Veterans Wall together, he finally seems to be able to appreciate the courage he and his fellow soldiers exhibited and perhaps put the past in its place and get on with his life. As a niece herself who understands the impact Viet Nam had on her own beloved uncle's life, I really appreciate this film.
Posted by The Gal Herself at 5/31/2010 12:50:00 AM 2 comments: