The wrapping is done! I'm looking at three bags filled with gifts, ready to be ferried over to my mom's for tonight's celebration. I feel very satisfied with myself, and am filled with anticipation, imagining my niece and nephew ripping the paper off and enjoying the presents I chose so carefully.

I'm also going to be sure to bring the O'Mara's Irish Creme, just to be safe. To borrow from Don Henley, sometimes it doesn't hurt to have "a shot of courage" nearby when my family gets together.
Posted by The Gal Herself at 12/24/2010 10:17:00 AM 2 comments:

A little romance, anyone?

Before we saw White Christmas the other night, my friend Barb told me about she celebrated her husband's 56th birthday.

She took him to New York for the weekend. They have traveled there before and while he was excited to see The Big Apple decorated for Christmas, he kept tweaking Barb that his birthday present was really an opportunity for her to shop.

That's what she wan

ted him to think.

For near the very narrow, overcrowded vintage shop she always visits in New York, the one filled to the brim with handbags and accessories, the one her husband cannot stand being in, is a music store specializing in Fenders. It's in the music store he finds escape as she searches for her dream one-of-a-kind bag or belt, and it's the music store's website he now frequently visits to gaze at the Stratocaster of his dreams.

So before they left, Barb called the music store and bought him the Stratocaster. She told the store owners when they'd be in and asked them to put the guitar in the window with a sign reading, "For Harold, Love Barb."

Their first afternoon in Manhattan, Barb and Harold head for that vintage shop. Harold is unexpectedly grumpy ... really resenting the boredom and claustrophobia that accompany watching his wife rummage through the handbags and costume jewelry. So she expected him to be happy when she volunteered that they bypass the boutique and check out his favorite music store first.

He stares at the guitars in the window, sighs at how expensive all the top-tier Stratocasters appear to be, and starts to turn away. He never even noticed the "For Harold ..." sign.

So Barb points it out to him.

He actually thinks it's some kind of wacky coincidence, that somewhere in New York is a Barb who also loves a Fender-loving Harold. He reluctantly goes along with allowing her to take his photo next to the sign. She showed me the photo. He looks almost pained.

Then he notices that the sign is beside his dream Stratocaster. It finally dawns on him that this may not be a coincidence after all. In the next photo, he's inside the shop, posing proudly with his new axe.

A newly 56 year old, bald accountant, looking like a kid again, thrilled as can be with his dream red Stratocaster, ca. 1965. 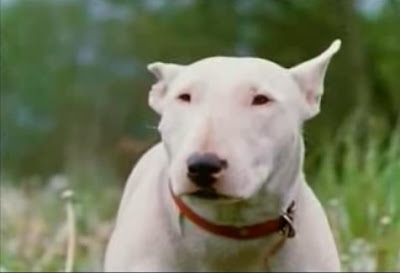 When I was a little girl, as a family we went to see the original Incredible Journey at a drive in. Ever since I have wanted a bull terrier like old Bodger.

Some feel their egg-shaped heads and triangular eyes are ugly. I think their faces have an extra dimension, making them look kinda silly and sweet. A cousin to the pit bull, they're gentler and easier to train, but still very loyal and protective of their owners.