Our morning at the vet

This was the worst day my big old tub of guts Joey could ever imagine. It was raining, and he hates that. For some reason, he's more sensitive to the changes in barometric pressure than my other cats are, and he hides (or tries to) away from windows whenever it rains. Then there was the "outside" aspect of it. The only Great Outdoors Joey needs is the carpeted hallway just beyond our front door. The traffic and smells and motion that accompany actually leaving the building don't set well with him at all. And lastly, there's the vet and his annual check up. Do you know what they do to you at the vet? UNDIGNIFIED THINGS!

By the time we got to the vet, he had peed on himself. So now he's terrified and wet and uncomfortable. I was eager to get him into the examining room so I could wipe down the carrier while the vet checked him out. At just about the same moment we arrived, so did a woman, just about my age, with a sweet and subdued mutt. We both waited with our pets in the reception area for a few moments, she discussing the new Dark Shadows movie with one of the vet techs. Then the doctor took her first. I was pissed because, well, Joey was uncomfortable and he's my priority and who are these people who aren't on board with this?

We sat there for a half hour, me and Joe, with the urine soaking into his fur. Now I'm angry. A HALF HOUR?! Really, people? 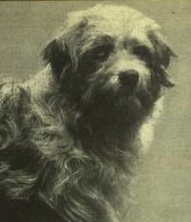 Then the woman came out, alone and in tears. The vet followed her, trying to get her to understand what he was saying. Apparently her dog wasn't merely shy or very well behaved -- he was subdued because he was in a lot of pain. They put him on fluids and pain meds right away and hopefully by Monday he'd be strong enough for the next steps. That might include surgery or a transfer to a facility with more sophisticated diagnostic equipment. Did she understand this? Was she giving her consent? The vet walked her out to the car ... I think as much to make sure she was capable of driving in the rain as to get her permission to spend thousands of dollars.

I felt like such a bitch for being angry that they took her dog before my Joe.

For while he was smelly and scared and wet and enormously fat, he's also in pretty good health for a 15 year old and I'm very grateful.

Labels: Cats, Critters
Saturday 9: Touch Me in the Morning 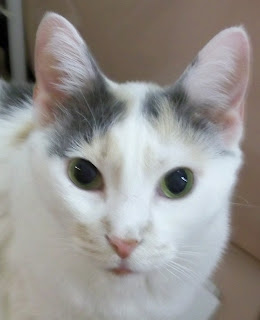 1. Who or what sleeps with you? My cat Charlotte

3. What do you do when you're sad? Drink and worry and fixate. The usual.

4. What do you wear when you are relaxing around the house? A tiara and feather boa.

5. What did you do immediately after high school? Had a Coke and opened graduation presents.

6. Is anyone on your bad side right now? Well, my bad side does appear to be my bigger side at times, so yes.

7. What's the first thing you do when you get online? Check my email.

8. What jewelry are you wearing? My lotus ring, my scroll ring, my watch and my earrings. Oh yeah! I forgot the tiara referenced in Q4.

9. Post a current song that you like. (Or name it and tell us why you like it.) Rita Wilson's "Come See About Me." I'm struck by how different it sounds with one voice instead of four. Miss Ross knew her girls had her back, so it sounded more defiant, more like a command or ultimatum, than this more stripped down, plaintive version.