Sometimes I think I'm the only one who remembers the high school lessons of Romeo and Juliet.

1) Do not let hate become ingrained.

2) The more you ask a person to defend a lover, the more in love that person falls.

As I watch Hillary Clinton defend herself on two fronts -- from Bernie Sanders supporters and Donald Trump -- I find myself admiring her more than I ever thought possible. I mean, I don't like the woman, and I see her flaws rather clearly.

But I understand why she is winning. It's not because of Super Delegates or Debbie Wasserman-Schultz, it's because of the popular vote. 2.9 million more citizens voted for her than voted for Bernie Sanders. I suspect the Sanders supporters who insist otherwise do not have many friends of color. I have friends who are Puerto Rican, Cuban and African-American, and they all view Sen. Sanders with great skepticism. They eloquently explain their discomfort with Sanders' stand on guns, their sense that he doesn't understand urban issues, their suspicion that he can't be trusted to maintain the Obama policies they support. Now that I think of it, none of them even mentioned Hillary when I asked why they didn't vote for Bernie Sanders. It was really more about Obama than Hillary.

I admit that they have influenced me. Not because I agree with them about Sanders. I don't. If he becomes the candidate of my party I will enthusiastically support him. I'm an old-school Kennedy girl/liberal who believes in inclusion, and the Democrats are about the government providing more  opportunities for more people than the GOP is.

I also believe demographics are destiny. If people of color don't come out to vote, my party won't win. And I'm convinced a large swath of the minority community isn't hearing Bernie Sanders. So when rabid Sanders supporters make it sound like Hillary has stolen this election and that people who voted for Hillary are stupid or just not listening, I'm offended on behalf of my thoughtful and involved friends. They are NOT stupid. They ARE listening. They just don't trust Bernie Sanders. And, in part, when I stick up for Hillary I'm responding emotionally because I don't like hearing my friends belittled or dismissed. R&J Lesson #2 applies here.

I am grateful to Bernie Sanders. I love the passion he has engendered in young people, like my nephew. I hope he stays in through the Convention and he makes himself heard in Philly. But he's not going to be the nominee. Because 2.9 million more citizens voted for her than voted for Bernie Sanders. This is where R&J Lesson #1 kicks in. Sanders supporters have convinced themselves that she is their hateworthy enemy and they can't let it go. Hopefully, when Barack Obama speaks out for her forcefully, his eloquence will snap 'em out of it.

via GIPHY
In honor of Cher's 70th birthday

And then there's Trump. Blaming Hillary for the way she responded to her husband and his women? Really? It's painful to watch. I was desperately offended by Bill's behavior in the 1990s and it's difficult for me to accept today. I reflexively wince and turn away when it's brought up. And again, I find myself defending her.

I suppose, when examining the complicated web that is the Clinton marriage, there's a justice to her being blamed for Bill's lazy zipper. After all, 20 years ago, he was blamed for her greed in the Whitewater mess.* But bring up the women and I relate to her in a more personal and powerful way than I otherwise would.

And then there's Vince Foster. A man she saw day in/day out during two different chapters of her life committed suicide while she was dealing with the death of her father. At the time I remember wondering if any of the RWNJs who soullessly blamed her for Foster's actions ever lost anyone. I guess they had fallen victim to R&J Law #1. 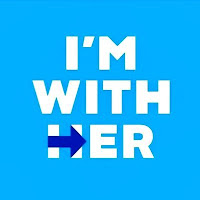 And what's the point of bringing it all up again? Instead of tarnishing her, it makes her appear rather valiant, like Don Quixote. Say what you will about Hillary, the woman can take a punch. And for a woman born in 1940s, being POTUS probably is The Impossible Dream. See? Here I am defending her. R&J Law #2.

So yes, I'm with Hillary. A little more every day. A bit more every time Sanders supporters and Trump lay into her.

*While you'll never convince me of her illegality, I am completely on board with her involvement. I don't have many illusions concerning the Clintons.
Posted by The Gal Herself at 5/26/2016 11:52:00 PM 1 comment: