She's back in my inbox 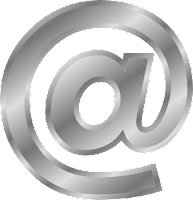 My oldest friend is back online, and back in touch! It's been about a year since she fell off the radar. She lost her job, then lost her car and her apartment and moved in with her cousin. Her health problems and depression escalated and she withdrew. Never logging onto social media, seldom checking her email, not often answering her phone.*

I've been worried about her, of course, but I have given her space. She moved to California to be with her cousin, she adores her cousin, and I thought she just wanted to be with Sharon. Too bad that wasn't the case. She's been stuck inside her own head. She told me she was becoming agoraphobic.

Anyway she has a new doctor who added Rexulti to her prescription cocktail and it has made a big difference. Her sense of humor -- one of our bonds -- has returned. She's begun writing (fan fiction, just for herself). Is back on email and Facebook and I am always happy to see her name on my screen.

She still has lots of health problems -- primarily bladder issues -- and in addition to meds she's doing talk therapy with a PhD. But she seems to feel that she's making progress, and that is exciting.

I have missed her. I am glad she is back.

"A motto to live by"

Above all, be the heroine of your life, not the victim.
Nora Ephron