What do these two trophies have in common? 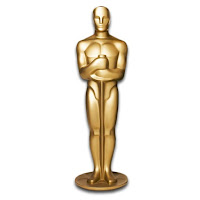 Julius and Philip Epstein were brothers. They began their career as well-paid "script doctors," brought in by Warner Bros. to punch up the dialog on dozens of scripts, usually without credit.When they got an opportunity to actually work on their own stuff, they did it with relish. When Howard Koch approached them to adapt a short story called, "Everyone Comes to Rick's," they came up with some of the most-quoted dialog in film history:

Round up the usual suspects.

Louis, I think this is the beginning of a beautiful friendship.

Here's looking at you, kid. 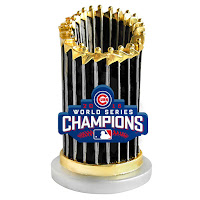 Philip Epstein had a grandson (meaning Julius had a grand nephew). His name is Theo. First, as Red Sox general manager and then (fabulously) here with the Cubs, Theo ended baseball's two longest droughts by bringing the World Series to two victory-starved cities.

Unfortunately, Philip and Julius had passed away by the time Theo brought new millennium glory to the family name. But isn't theirs just the most fantastic gene pool?

All of this is top of mind because my movie group took a field trip to see a special TCM-sponsored screening of the restored Casablanca. In a special video intro, Ben Mankiewicz reminded us of the Epstein connection. (He know what he's talking about, as the Mankiewicz clan is pretty impressive, too.)