Yes, I went to see the revival of a Pulitzer Prize winning play that got it's start right here in Chicago. Very literary, very deep, very dark ... and really very funny. Terry Letts' August: Osage County is touring and if you get a chance, go see it.

It's about a smart, gifted, Oklahoma-based family that is completely unraveling. Daddy, a published poet, disappears. Mommy, a powerful personality battling with cancer, needs the help of her daughters. Well, not all three of them. The only one she really wants is Barbara, who moved to Denver to start her own family. Ivy, the dutiful daughter who has stayed in Oklahoma to care for her parents, resents this (and her mother's constant carping about clothes and hair) but bears it all stoically. Karen, the baby of the family, is trying to start an independent life in Florida. But as soon as the family tragedy brings her through the front door, she reverts back to being the silly little girl the family expects her to be.

It's about mothers and daughters, daddies and daughters, depression, addiction, suicide, infidelity, and all the other things that make family gatherings memorable. Especially if your family is smart enough to spout dialog worthy of David Mamet or Tennessee Williams or Edward Albee.

I saw it with my friend Barb, my theater-going buddy, who kept saying all through our pre-theater dinner that there was no way she would be able to sit there for more than three hours. Barb and I have different tastes in plays to begin with, and this kind of sinister, talky drama is not generally what she enjoys. (I tease her that in her perfect world, every play we see would be River Dance or Mama Mia.) Yet once Act II kicked in, she didn't want to leave her seat -- not even to check her ubiquitous iPhone. There is no higher praise for a character-driven, non-musical production.

Special cast notes: One of the less savory characters in the play, Steve the Fiance, is played by Laurence Lau. Back in the day, he was Greg from Jenny-and-Greg on All My Childre 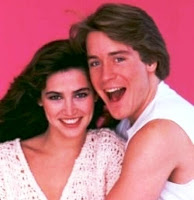 n. He's older and carries an air of depravity that works for Osage County but would shock those who knew him in Pine Valley.

And Mama Violet was played by Estelle Parsons, just as annoying as she was in 1967 when she won an Oscar as Blanche Barrow in one of my favorite movies, Bonnie and Clyde. I had to restrain myself from celebrating her entrance by getting up and yelling, "My eyes, Daddy, MY EYES!"
Posted by The Gal Herself at 2/05/2010 04:51:00 PM 1 comment: 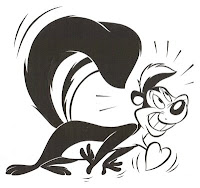 Or any of the Warner Bros. cartoon characters. Because this afternoon my heart has been beating so hard I swear you can see it thumping through my sweater.

I'm just wound up, nervous. No particular reason. Made all my deadlines, so there's no professional Sword of Damocles hanging over me. And I'll be able to get out of here soon and begin braving the snow storm. (I suspect it's more wind and storm than actual snow.)

I had hoped that working out over lunch would have helped, but it didn't.