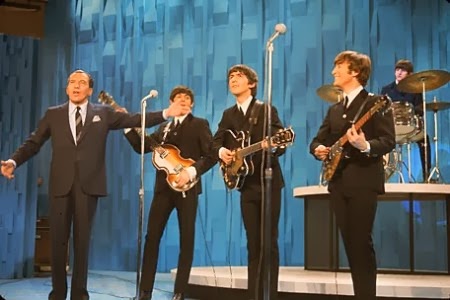 I'm not much a crier. But I cried today when it washed over me how much I miss my uncle, and how much he gave me.

It was 50 years ago today. I was six. For some reason the clan had gathered at my Icky Grandma's house. I was getting bored and fidgety. My uncle suddenly rescued me from certain scolding by inviting me to join him on an errand. We ended up at Korvette's department store -- one of the few that were open on Sunday. I don't remember what we came for, but before we got in line to pay he was distracted by a group of young people. (He was, after all, just 21 at the time.) They were surrounding a card table. He guided me over there and we checked it out, leavng with a record for 99¢ and a free balloon. The record was "Love Me Do/P.S. I Love You" and the balloon featured a pictured of these four young men that none of us had ever seen before. We returned to Icky Grandma's and, as the family gathering broke up, he reminded me watch The Ed Sullivan Show that night so I could see what all the fuss was about.

The rest, as they say, is history.

If you read this blog at all, you know that I am a massive Beatle fan. He gave me that, and few things gave me as much enduring joy as The Beatles. But that's just one thing I am grateful to my uncle for. I remember him as always bringing fun and magic with him.

I do not believe in revising history. My uncle was not a perfect man. Frequently, he wasn't even a nice one. But he was always, ALWAYS good to me. He was my godfather and he felt a connection to me. This story, that began when he got me out of that house before I could get another stern talking to lecture just for behaving like a child, was a good indication. For my Icky Grandma was his mother, and he knew how soul crushing she could be.

He should be alive today. He should be on the other end of the phone as I call him at this hour (7:00 on Sunday night) and thank him for giving me the Lads, and everything else he gave me. Instead, his life was cut cruelly short by Parkinson's. Because his condition was no doubt exacerbated by service in the Army and his exposure to Agent Orange, and I am very, very angry right now.

I take some comfort in knowing I thanked him in life, and that from his unique vantage point in heaven, he knows how fondly he's remembered right now.

Where did today go? 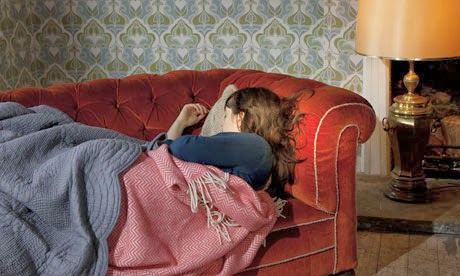 Got up. Attended church. Shopped at Petco and picked up an egg-and-cheddar bagel on the way back. Laid down on the couch for a minute and ... SHIT! IT'S AFTER 4:00! MY SUNDAY IS GONE!

2.)Are you going to celebrate it? Not especially.

3.)Celebrate Valentine's Day with friends or someone special?  No

4.)Pink or red? Whichever is brighter. I'm not big on pastels.

5.)Candy Hearts OR cards? Are we talking a heart filled with chocolate candy? Or those "be mine" sweethearts. If it's chocolate, I'll go with those. Otherwise, I'd like a nice, old-school Valentine with cupid on the front.

6.)A short kiss or a big hug? Depends on who is doing the kissing/hugging.

7.)What are your plans for V-day?  Budgeting for payday and preparing my tax paperwork for the accountant.

8.)What would be the best gift to receive? Sex.

9.)Would get back with any of your ex's for V-day? In a weak moment.

10.)Is there a food or beverage you associate with V-day? No

12.)Do you think people who have dated can stay friends? I have never seen it first hand.

13.) If you could go back in time and give yourself one piece of advice about dating or relationships what would it be? Don't excuse bad behavior by saying, "Aw, he doesn't mean it." Trust your 2014 self, Gal. He did mean it.

It's time they were vanquished! 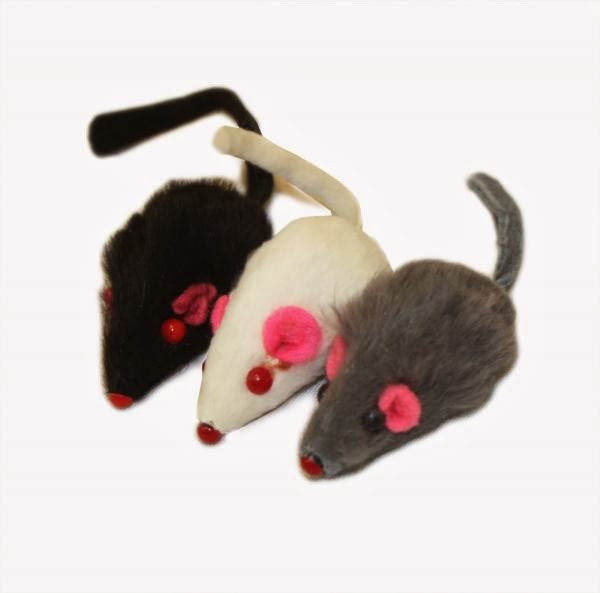 My cat Charlotte is behaving much more like her old self. Not only is she eating often and enthusiastically, she tracked down and killed her fuzzy mice. Finishing off the gray one required special care but she was up to the task.

She's still not out of the woods. Getting food and fluids into her was just the first, most critical step in getting her well. Her hypothyroidism is still slowly killing her. She's still down to barely 5 lbs. While her eyes are no longer watery, the pupils are still dilated and that's a sign of high blood pressure. Once she stronger, we have to get her back on her thyroid meds.

She's at least 14 years old, perhaps as old as 17. I realize she may be reaching the end of her feline life. I'm not trying to keep her alive at any cost. That would be selfish. But I am devoted to keeping her as comfortable and happy as I can for the time she has. That's the deal I bought when I adopted her.