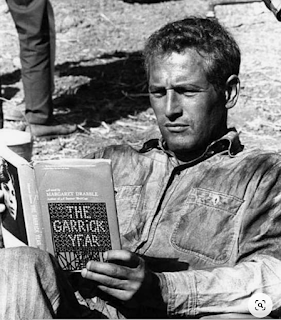 1. What are you currently reading? Murder at Blackburn Hall by Sara Rosett. Olive Belgrave has a problem: money. So why she doesn't just get a job? She tried, but she comes from a titled family, and in 1920s London, she can't just be a barmaid. The book opens with her interviewing for a "suitable" position as a hat model. The milliner hoped Olive could attract her friends in the gentry to the shop. This is a suitable short-term fix, but Olive would prefer to have her own clients for her "high society lady detective service."

Olive discovered quite by accident that she has a talent for "discreet inquiries." Turns out that's something the aristocracy needs every now and then -- to check out a daughter's new beau, find a lost chihuahua, vet a nanny candidate, or, as is the case in this volume, look into the disappearance of a famous author on behalf of his publisher. Olive is so much more circumspect than those vulgar police!

This is the second book in the series and, while I'm not very far into it, I'm already enjoying it as much as I did the first, and for the same reason. The writer creates such a lively post-WWI London. I love the hair and the clothes (especially the hats; 100 years ago everyone wore hats) and the milieu: Olive bounces back and forth between two worlds, upstairs and downstairs. Here's hoping the mystery itself turns out to be as engaging as the setting.

2. What did you recently finish reading?  The Break by Marian Keyes. I am so MAD at this book! There is the kernel of a great story here. But Marian Keyes buries it in bloat. Too many irrelevant characters and scenarios that go nowhere. Consequently it takes 400 pages to tell a story that could comfortably have been told in 325.
Amy and Hugh have been married for 17 years. Amy thinks she has a happy home, but when a pair of deaths hit Hugh hard (first his dad, then a boyhood friend), she realizes her husband is really struggling. He tells her he wants six months off, "a break" from marriage. He wants to travel, to put himself first for a change, to get more out of life before it's too late.
I like the way Keyes uses flashbacks. It would be easy to dismiss Hugh as selfish and heedless, but slowly we see that he's a wonderful dad, just crippled by depression. Very effective dimensional story telling that makes you question what you think you know about your friends' marriages.
But then there's the ridiculous excess. Amy has four siblings. Each is given a backstory, yet only two really matter to the plot. Example: Her gay brother and his partner have an adorable baby via surrogate. I kept waiting for them to matter to Amy's tale. They never do.
Amy works in PR and keeps flying back and forth between Dublin and London. Her job was interesting, but did we need to meet so many of her clients? One of her clients brings his brother -- a sour man who prefers to be called "Dan" and not "Dante" -- to meetings because ... well, hell, I either forgot why or stopped caring.
Amy loves vintage designer clothes, which shops for at estate sales. OK, I get it. She's giving new life to the clothes of dead people. It's a charming idiosyncrasy. But do I need to know what she wore every damn day for a year?
Really, I'm tempted to take my own damn blue pen to this thing and see how much I can excise without diminishing the center of the story: the homelife that Amy and Hugh built together for themselves and the three girls they're raising, and what Hugh's sabbatical does to it.
3. What will read next? A biography of Paul Newman (hence this week's photo).

Introduced to Rob and Andy

Sunday I finally got together with Joanna! We haven't been in the same room since September 2020. Ten months. Gulp. Damn covid!

I was surprised to see her. Because she looked a little different. She was in a stretchy white t-shirt that hugged her round tummy a bit too much. Her usually smooth and sleek hair was waving any which way it wished to and there's a lot of gray visible. Normally I don't comment this much on appearance but appearance is Joanna's barometer. She's the only woman I know who has both winter gloves and fashion gloves. She usually won't leave the house without coordinating. I remember the day we met for frozen yogurt and she showed up wearing black accented by red earrings, a red scarf, red (prescription) eye glass frames and even a red case for her phone. Yes, she changed cell phone cases just to meet me for yogurt! So I was surprised to see her looking as average/everyday/not-pulled-together as me or anyone else. (Though her new cat's eye glass frames were amazing!)

Joanna is self employed and she works when assignments come in. She told me it's been feast or famine, 9-5 be damned. I suspect that trips to the salon have not had a place in her schedule or her budget.

We caught up on one another's lives. She's still mad for her "boyfriend," Sid. I used the quotes because Joanna is 66 and Sid is over 70, and somehow "boyfriend" seems a bit jeune fille. (Joanna is a francophile.) A retired real estate developer, he has lots of money and nothing to spend time on but her. He's also a stroke survivor dealing with short-term memory loss, so he can be difficult. He lashes out occasionally, accusing Joanna and his daughter of "ganging up" on him when it comes to his care ("and we are," she confirmed, laughing). When she's with Sid, everything is first class. But when she's on her own? Finances are a struggle. She doesn't want him or his daughter to think she's there for the money, though, so she won't ask for any help.

The stress has caused her to have a sudden, severe headache, which she worries could have been a TIA. I'm happy to say, though, that she's getting care. She mentioned it first to her eye doctor (she was already going there to pick up those fabulous cat's eye frames) and her GP. Neither doctor thinks it's anything serious, but to be safe, she's scheduled for an MRI next month. This is such a relief after Kathy, Henry and John -- three close friends who simply will not get the medical care they need.

Because we're both classic movie fans, I told her about how much I enjoyed The Purple Diaries: Mary Astor and the Most Sensational Hollywood Scandal of the 1930s. I mentioned how relatable I found Astor, even after 90 years, because all she wanted was hot sex with a man she liked, and somehow that eluded her.

That's when she told me about Rob and Andy. I knew she'd been twice divorced by 30, and very embarrassed by this. But beyond that, she didn't tell me much about her marriages.

Rob was her first great love. He was beginning his career as a dj and she was just out of college. This was 1975, and while she wasn't a virgin (not by a long shot, wink-wink) he was less experienced and she respected that. They never had intercourse until their wedding night where they were, she reports, completely incompatible in bed. At first she thought it was their conflicting schedules -- he was working overnights. Nope. That wasn't it. When he got the mid-morning shift they arrived home at the same time. 22 year old newlyweds and barely intimate! They were such good friends everywhere but between the sheets she thought perhaps he simply wasn't attracted to her. Rob -- who could talk to her about movies, music, tennis and birds -- refused to discuss their sex life. She wanted a baby with a lifetime partner and she knew Rob wasn't it. So after two years, she left.

That's when she met Andy. He was so passionate she was swept off her feet. The thing is, that passion translated to high drama in other areas of life, too. When he found it hard to express himself verbally, he hit her. Then, in self loathing, he'd injure himself. (Cutting, bashing his head into walls, etc.) Just when life outside the bedroom was becoming unendurable, she found she was pregnant. Idealistically, she was sure the baby would cure everything. In the spring of 1981, early in her pregnancy, she had a very painful miscarriage. It broke her heart, because she really wanted that baby (and still remembers his due date: August 1, 1981). But it caused her to reassess her life. She didn't want to bring a child into her tempestuous relationship with Andy. So after two years of marriage, she left. She was 28.

In her 20s and 30s, she never found a man who embodied Rob's sensitivity and lovability and Andy's passion. She never had that baby she always wanted. 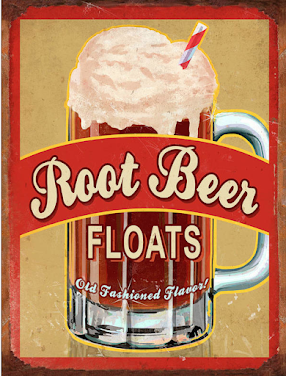 There were no tears as she shared this. I think it was too long ago for that. She was just telling me how
well she, too, understood Mary Astor. But it reinforced a lesson that I keep relearning every time I read about President Kennedy -- no matter how good someone's life looks from the outside, you have no idea how it feels on the inside.

I didn't tell Joanna she reminds me of JFK -- attractive, charismatic, and filled with pain and sorrow no one would ever suspect. I think she might find that amusing.

But talking about Mary Astor, Rob and Andy was heavy enough on a sunny Sunday at an outdoor cafe over a root beer float.