The Yankees have been playing in New York since 1903. In all that time, only one player has ever batted in a run in each of his first six games. 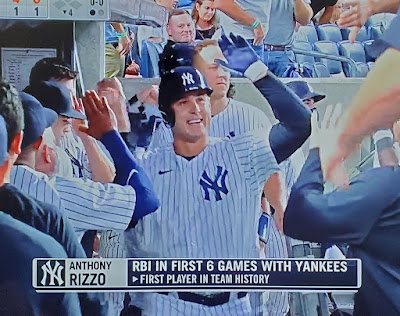 Today's happiness -- A trip to the park.  Reynaldo and I spent about 30 minutes at the park today. I put the carrier on the ground and sat with him in the dirt. There are better bugs in the dirt. (I never took him out of the carrier because dogs are welcome in the park, and no good would come of that.)

I am trying very hard to accept a situation in which I'm helpless. My little man is old and battling a full menu of chronic maladies: glaucoma, arthritis, kidney and thyroid conditions and now a bad ticker. I cannot make him young again, but I can do whatever I can to make him happy. While today was bittersweet, I hope when I look back on Reynaldo's last summer, I'll remember this as only sweet. 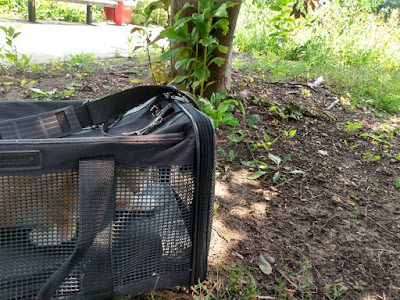 I went to my longtime dentist with a broken tooth in early April. He did a quick fix, referred me to an endodontist, and retired in mid-April.

The endodontist did a terrific job on the root canal but I needed a dentist to order and affix the crown. I went to a local dentist recommended by my friend Nancy's husband, Paul. I shall forgive Paul.

His dentist did a good job. Prepped the tooth and ordered the crown. It was supposed to be in on June 7. He'd just snap it on and we'd be done. He told me that appointment would about 30 minutes. I was happy.

Here we are 58 days after June 7, and I'm still making dental appointments.

•  On June 6, they called and said my crown wasn't in yet. They'd let me know when it arrived. Any day.

•  On June 16, I called and was told the crown was indeed in and they'd squeeze me in. I wonder what would have happened if I hadn't called. Would they have let the crown just sit there forever without contacting me? 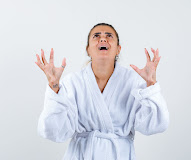 •  On June 18, I went in and the dental assistant removed the wrong crown. I am not kidding. This really happened.

•  There was decay under the crown of that tooth. But the crown was holding steady and I was in no discomfort. The tooth has been damaged by all the disruption and I am going to need a "Nesbit partial" until next year, when insurance will pay for an implant. They are giving me the Nesbit for free. We act as though I will return to them for the implant, but that is sooooo not going to happen.

•  On Tuesday I went in to have the Nesbit appliance installed. While the dentist was working on it, it cracked. It fucking broke.

•  A new one will be in within two weeks.

It's now been 58 days since June 7, when my 2021 dental adventure was supposed to be done.

I want to scream. 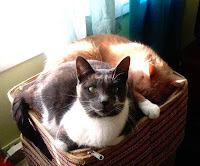 I stumbled upon this photo, taken not that long ago, of Connie and Reynaldo sleeping in front of the living room window and realized he no longer cares about looking outside. It no longer interests him.

He also doesn't sleep with me anymore. He used to haunt the foot of my bed. I can't remember the last time I woke up to find him there.

I spent some time in the den on Tuesday, vacuuming and setting up plant stands. I keep the den door closed, so when I came out I expected to see his bright and curious face, demanding to know what I'd been up to in that most mysterious room. He wasn't waiting for me when I emerged because he didn't care.

He crashed my Zoom movie group on Monday night, amusing everyone when what looked like a disembodied tail repeatedly swished by the camera. But I can't recall the last time he made an appearance in a work Zoom.

He doesn't play with Connie anymore. They used to chase one another up and down the hall. He's uninterested.

His June bloodwork came back and his thyroid and other vitals appear good. However in addition to cloudy vision he has arthritis and two chronic-but-controlled conditions (thyroid and kidney) and now a heart murmur. Maybe this is the just what the end stage of his life is like.

I'm sitting here, pre-dawn, trying to figure out what to do. Do I want to discuss this again with the vet? Are there things I can do to improve his quality of life?

I thought I was ready for this. I'm not.