Chicago has a new mayor. A black lesbian who has never held office before. When we mix it up around here, we really mix it up! 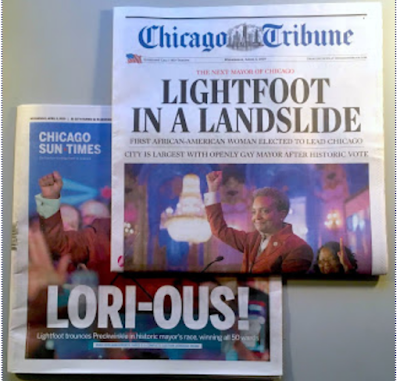 There's more to Lori Lightfoot than her color and her sexuality, of course. First, she's not remotely beholden to The Machine. Her opponent -- another black woman named Toni Preckwinkle -- is Cook County Board President and head of the local Democratic Party. Can't get much more Establishment than that. What's more Preckwinkle accepted fundraising help from Ed Burke. Alderman Burke is the poster boy for Cook County corruption.

Here's the thing: Toni Preckwinkle has been in city government for nearly 30 years. When she came up through the ranks, she simply had to play along with The Machine. There simply was no other way. Last week, those relationships weighed her down.

Meanwhile, Lori Lightfoot is seen as a reformer. She headed Rahm Emmanuel's Police Accountability Task Force, a civilian organization that explored the myriad problems with the Chicago Police Department. She worked with Rahm, but never seemed indebted to him. She played it smarter than Toni did.

After Laquan McDonald, this city wants someone new. Someone clean. Someone different. And we got her.

God bless her. Let's hope she doesn't let us down. 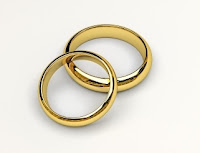 I've never been married. I don't pretend to know what goes on in a marriage. For me, married people are like exotic creatures in nature specials. "Look! There are the spouses, behaving as they will in their natural habitat."

Which is why I'm so flummoxed by what is happening between Reg and Henry. The lack of communication between the two of them is astounding, and it isn't all rooted in the sad aftermath of Henry's accident.

Their dog, Lola, had been in declining health for a year or so. I clearly remember a conversation Henry and I had last summer. Before his accident. We were talking about my cat Reynaldo's 2017 dental work. Lola's breath was bad and she'd become a pickier eater, and I wondered if she didn't need her teeth checked. Henry said he understood why I had I had taken Rey in first for a check up and a tooth extraction, but he felt it was too expensive and too risky for his Lola. "I am convinced if they put her under, she will not wake up," he said.

Even more telling, I recall the way Henry recounted the euthanizing their cat. He told me about this over Christmas 2017. She fought it, Henry insisted. She writhed and lifted her head and refused to die. I told him that she was already dead, really, that those were just involuntary reflexes. "Like a chicken with its head cut off." I told him he should be mad at the vet for not preparing him this possibility.

Henry dismissed me, saying the incident had taught him that putting an animal down is wrong and he would never do it again. That conversation took place more than 9 months before his accident.

Last week, Henry's husband Reg began posting about Lola's decline. He actually wrote that, "Henry and I have had many dogs and cats since we have been together over 20 years. Initially, we held on to them, regrettably, too long. But we learned, a few years back, to let them go when it was their time."

That is simply not true. At least, not judging by what Henry told me after they put their cat down.

Lola died Sunday night. At home. In Henry's arms. When Henry recounted her passing to me, he told me about how he carefully placed her on a purple pillow ("purple is the color of royalty") and said that when Reg woke up, Henry told him they needed to first find a box to put her in, and then decide who would cremate her. Reg was upset, naturally, but he went to the office. And Henry went about finding a box for her little body. It was decided that Tuesday afternoon, she would be cremated by the local humane society. That made sense to Henry. Symmetrical. After all, they adopted her from the humane society.

Reg's version could not have been more different. On Sunday, he recounted how Henry awakened him as soon as Lola died pre-dawn. He posted, "Cremation? Backyard burial? I am going to talk to humane society. Why do I have to do everything? Oh! I know! Because, within my marriage, I am the only one of two with rationality. That's a scary thought. We will get through this."

I believe each man believes he's telling the truth. And I have no idea what actually happened in their house on Sunday.

But I do know this: Even if Henry hadn't suffered a brain injury in his accident, he would have resisted putting Lola down. This is a sincere disagreement between two men, not a case of "only one of two with rationality."

What's worse, I feel like I'm watching a car crash happen in slow motion. Right now, Henry avoids social media. He says it "infuriates" him. But one of these days, he's going to go online and read what his husband has posted. He will not be happy. I worry that he will regard it as an unforgivable breach of his privacy.

Sometimes I'm very happy to be a barren spinster.

Image courtesy of Danilo Rizzuti at FreeDigitalPhotos.net
Posted by The Gal Herself at 4/03/2019 01:08:00 PM No comments:

"What are you most grateful for?"

Another day. Another chance. Every morning, when I wake up, I have opportunities, and for that I'm grateful.