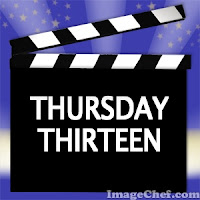 I just saw Hitchcock, starring Anthony Hopkins, and was fascinated and delighted. The movie centers on the making of the director's most successful and controversial film, Psycho. Here are thirteen facts about that dark, twisted masterpiece.

1) Hitchcock turned down directing Dr. No, the first James Bond film, to do Psycho instead. He said that instead of another espionage thriller, he wanted to make the first high-quality horror movie.

2) While Marian Crane is Janet Leigh's most famous role and earned her an Oscar nomination, she was not Hitchcock's first choice. He wanted Eva Marie Saint, the female lead in his last movie, North by Northwest.

3) Roddy McDowell wanted to play the part of Norman Bates, but Hitchcock preferred the more diffident, less famous Anthony Perkins for the role.

4) While he enjoyed working with Hitchcock, Anthony Perkins regretted taking the role, saying it typecast him.

6) Hitchcock had a small budget for Psycho and shot in black and white because it was cheaper and easier. For example, he was able to use chocolate syrup (Bosco, to be exact) instead of stickier, conventional fake blood in the famous shower scene.

7) The 3-minute shower sequence took nearly a week to shoot. Janet Leigh said that since it wasn't particularly difficult to perform, she was surprised by how terrifying it was to watch ... and once she saw the finished film, she always took baths.

8) The screeching score that accompanies that famous screen murders is performed exclusively by string instruments.

10) Popular as it turned out to be with audiences, Psycho was nearly not released. Paramount thought it was too grisly and Norman Bates' sexuality was too confusing for audiences.

11) Walt Disney was so offended by Psycho that he refused Hitchcock to shoot on location in Disneyland for the Alfred Hitchcock Presents TV show.

12) Hitchcock appears in all of his films, and in that regard, Psycho is no different. You can see him through the window of Marian's office near the beginning of the film. He's the one in the white fedora.

13) While shocking upon it's release in 1960, a rep from the MPAA has said unofficially that it would probably earn a PG-13 rating today. After all, there's no explicit nudity and we viewers never see a knife piercing skin.


For more about the Thursday 13,