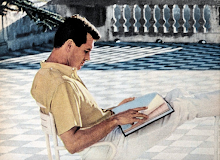 1. What are you currently reading? Dirty Blonde by Lisa Scottoline. Cate Fante has been on a fast track for years, culminating in a judgeship. But she has a secret: she's irresistibly drawn to the wild side. Her behavior is not appropriate for a member of the judiciary, it causes her stress, but she's helpless to stop herself. When she's assigned a high-profile showbiz case, the tension escalates because of the press coverage. What if one of the bad boys she likes to bed recognizes her from the TV that's always on in the dive bars she frequents? She could lose everything she's worked so hard for.

This is an interesting premise, one I haven't seen before, and Scottoline is a good story teller. I just hope I come to like Cate a bit more than I do right now. Genuinely caring about the heroine would make this more compelling.

BTW, this is the second book in row (see below) that involves living a double life. I came upon this completely by accident because it's a Scottoline I hadn't yet read, so it's just a coincidence.

2. What did you just finish reading? All that Heaven Allows: A Biography of Rock Hudson by Mark Griffin. I recall Rock Hudson as being old when he died in 1985. He was 59, younger than I am now. But he was ravaged by illness and looked much older than his years when he became the first public face of AIDS.

His life was short and ended early, but that doesn't mean this book is depressing. Author Mark Griffin takes us along as Rock escapes his unhappy home life first with classmates, then the Navy, then Hollywood. He worked hard, paid his dues, and slowly but surely became the biggest movie star in the world. He deserved the success. Moviegoers loved him, his coworkers enjoyed him, he shared a great deal of laughter with many good friends ... and he expended a great deal of energy hiding his homosexuality. He was always afraid of blackmail and exposure.

He was born Roy Scherer and the public knew him as Rock Hudson. But people in his personal life called him "Roy" and "Rock" interchangeably. Once Marilyn Monroe hit the big screen, she stopped being called Norma Jean. No one ever called Judy Garland "Frances" or referred to Cary Grant as "Archie." And yet Rock Hudson never completely quit being Roy Scherer. I found this to be the most obvious example of his double life, and it made me sad that he had to live in secret.