1) In this song, Haymes sings he must have reassured his girl "a million times or more." Does it frustrate you when you have to repeat yourself? Not especially.

2) The lyrics were inspired by a poem written by a war bride to her soldier husband. Have you ever been in a long-distance romance? Yes. I was here in Chicago and he was in Philadelphia. We talked every other night and spent a long weekend together each month, plus the holidays. I admit it suited me nicely. Things didn't go off the rails until we decided it was time to take it to the next level and get hitched. Oh! The arguments we had when it came time to really merge our lives! Still, I remember him very fondly.

3) This was the biggest hit of Dick Haymes, a popular singer in the 1940s. He got his big break when he replaced Frank Sinatra, who left the Tommy Dorsey Band to go onto bigger and better things. Are you a Frank Sinatra fan? More every year. When I was a kid, I thought he was silly and irrelevant. Then I had my really heart broken. (See #2.) When he sings, you can tell Frank had his heart really broken, too.

4) During the 1940s Dick Haymes toured with the Dorsey Band, made hit records, had his own radio show and appeared in nine movie musicals.  Yet by the early 1950s, he was broke. Part of it was that musical tastes changed, but more of it was that he enjoyed night life and high living too much. If you wanted to shave unnecessary expenses from your budget, where would you economize? Impulse buying! It's so easy to see something online and then "add to cart." I must stop and ask myself, "Really, Gal? Do you really need this?"

5) He blamed his money problems for his ongoing hypertension. How do you combat stress? Poorly. I'm always worried about something.

6) Though he needed his voice to sing and suffered from high blood pressure, Haymes was a chain smoker. What bad habit would you like to quit? I'd like to spin this around a little. There's a good habit I'd like to adopt: drinking more water. I did this when I was in the office daily, because getting up to go to the coffee room and filling my mug with ice water was a nice way to get away from my desk. But now that we're working from home, there are so many other distractions. I really need to  remind myself to swig more often from my water bottle.

7) Though raised since early childhood in the US, Haymes was born in Buenas Aires to an Argentinian rancher and his Irish wife. This enabled Dick to claim Irish citizenship later in life. Have you ever lived abroad? If not, do you wish to? No, and not really.

8) Dick Haymes never regained his popularity as a singer. After touring Europe for years, he returned to the United States in the late 1960s and tried his hand as a dramatic actor, playing small parts on popular cop shows like Adam 12, McMillan and Wife and McCloud. If you had to support yourself as a performer, would you be more successful as a singer, a dancer, or an actor? I'd starve.

9) Random Question: We're at the booth of a gypsy fortune teller. Would you be more embarrassed if she loudly and correctly guessed your age, or your weight? I think I look good for my age, so I'd be proud if she guessed that. But my weight? SHUDDER!

And so I'm schlepping to Jewel 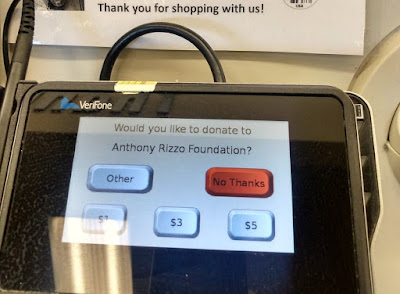 To get to the Jewel grocery story, I have to pass Target and Whole Foods. Yet I shall do it this month, because at checkout I can support my favorite most Cub and his good works.

Attention Must Be Paid 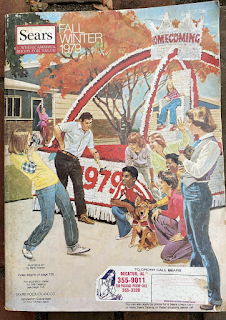 On June 4, 1979, I began my career as a writer. Wearing a dress, pantyhose and high heels, I entered a beige metal cubicle. I sat down before a manual typewriter, rolled in a piece of ruled pica paper, and pounded out copy about men's work pants and tube socks for The Sears Big Book. I will never forget the thrill, months later, of seeing someone lug The Big Book under his arm onto the train. People actually read what I wrote.

Today, 42 years later, I'm still at it. Only today I worked from home on a MacBook Air. I wrote a post for my client's blog and composed dynamic content for a trio of Gmail ads. I wore a t-shirt emblazoned with a recent vacation destination, but if I felt like working in my pjs, I could have just opted to not turn on my camera.

I've been supporting myself, without interruption, as a writer my entire adult life. I lost one job when the company I worked for bellied up, but I've never been laid off or fired. That is very rare in this industry. I'm more proud of that than I am of my Tempos, Echo and Clio. I've moved my clients' business along and maintained my integrity. I'm proud of that, too.

I've learned a lot from terrific mentors. I've had great coworkers who have become friends, closer than family. June 4, 1979 is the date I met John and Mindy and they are part of my life to this day.

As I round third and head for home, I realize I am fortunate that I've made something of a success doing what I enjoy and what comes naturally to me.