The Last Time I Saw Him


1) In this song, Miss Ross sings of a tender farewell at the bus station. When did you last say goodbye to someone at an airport, dock, train or bus station? The last time I said "goodbye" at the airport, I was waving to my niece before entering Muskegon County Airport. Only two commercial flights take off, and two flights arrive, each day from this tiny airport. All go to O'Hare. I'm told that charters often fly from Muskegon to Vegas, too.

2) Continuing with the theme of "lasts," who received the last gift you gave? I gave an expectant coworker a swaddle blanket and a little t-shirt that says, "Ciao!"

3) Who last did you a favor? I'm sooooo not tech savvy, and one of my coworkers helped me out with a file.

4) What's the last thing you dropped or broke? I lost the TV remote control under my bed this morning. Does that count?

5) What's the last thing you borrowed or lent? I can't think of anything.

6) When is the last time you danced? I do clumsy little dance steps all the time as I sing with the radio or TV.

7) When were you last nervous? Waiting for my friend Barb. We were at the hospital, where her husband's condition was being diagnosed. I knew she would be upset, and I was afraid I wouldn't be up to the task of comforting her. I held her and let her cry and offered to stay with her. Beyond that, I'm not sure there's anything else I could do.

8) What was your last DIY project? I put my cell back together with Scotch tape.

9) When did you last check your horoscope? Was it accurate? Years and years ago. It probably wasn't accurate or I would have continued reading it.

Months ago, when I found out when we would be seeing Hamilton, I was worried. The last week of September is typically crunch time for teams in play off contention. I planned on insisting I take the seat on the aisle so I could run out and check my phone during the performance.

Behold the best record in the major league baseball, Ladies and Gentlemen. I can be forgiven for not expecting this. It's also the best record the Cubs have earned in more than 100 years.

With my guys MORE THAN 18 GAMES AHEAD of the Cardinals, my fat ass stayed in the seat for the entire performance. 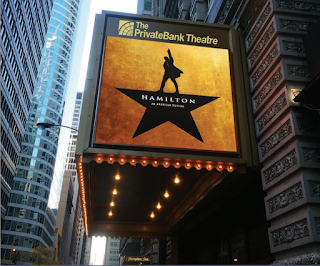 I've seen so many wonderful shows at this theater,* beginning with A Chorus Line in the 1970s. A haunting Cabaret revival, the hilarious and surprisingly sweet Book of Mormon, the ultimate jukebox musical Jersey Boys ... But I've never seen anything like Hamilton.

It's a rap opera. I loved it so much I forgot I don't like rap. The score was also heavily influenced by 1964-66 British invasion pop, reggae and the Great American songbook.

To be honest, before Hamilton, the only Revolutionary-era figures who sparked my imagination are Jefferson (portrayed as a Princelike rock star) and Abigail Adams. Now I'm fascinated by the bastard orphan son of a whore and a Scotsman who grew up to be a hero and a scholar. While Abigail Adams doesn't appear, this play is not short on women. And let's face it, most accounts of our nation's birth emphasize the Founding Fathers at the expense of the ladies.

This all does my heart good. Before the play started, I heard a young man (18? 21?) whistling "My Shot." Just as I've never much liked rap, I bet this kid never much liked American History. There were some children in the audience, too, but I was especially excited to see high school/college aged kids.

The cheapest seat for tomorrow's matinee is $400. That's nose bleed. Is it worth it? No. The play will be here well into the new year (I wouldn't be surprised if it wasn't still here in 2018) so the demand will diminish and the prices will go down.

But you definitely should see it. It really is that good! PBS is showing a documentary about its creation -- Mr. Manuel, I am in awe of you! -- later this month. I can't wait.