Something you don't see every day 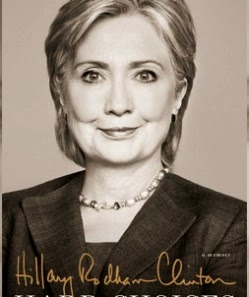 I rode the el this morning sitting across from two typical suburban dads. Between 45 and 55, wearing
open-necked shirts. One wore jeans and a baseball cap, the other was khaki clad.

First they talked about Kansas City (the Royals, I suspect). Then baseball cap dad said he'd read Hillary Clinton's new book over the weekend. "It wasn't as good as her other one, It Takes a Village," he reported. "I thought I'd get a book for Father's Day, but I didn't," khaki replied. Then they began talking about baseball cap dad's "old school" lawnmower and how he keeps the blades so sharp.

It occurred to me that this was the first time I have ever heard men spontaneously talk about Hillary. What I found heartening was the context. She was an author. Not a female author. Not a woman writer. Her gender was not remotely the issue

I have always been lukewarm toward Mrs. Clinton. I appreciate her, but I don't like her. I understand her intellectually, but I don't trust her. I'll vote for her vs. just about any Republican, but I'd like to see someone run against her.