"This bird has flown"

The entire front of the building I live in is glass. Four stories of windows facing the street. Vines crawl up and poke through the caulk between the panes, allowing for water damage. And so it was decided that the vines should be removed.

I get the decision. I'm in favor of it ... in theory. But the strong, thick vines have become home to bird's nest. I observe it every morning when I walk down the stairs. I noticed it because the

resourceful bird used a hank of bright red fabric, thin and netted, and laced it amid the twigs. I hated to think that a bird with such an eye for interior design would lose her home.

I'm happy to report that since they waited until after Memorial Day to remove the vines, the landscapers are removing an abandoned nest. I don't know where the bird went, but she moved away of her own volition before she could be evicted. 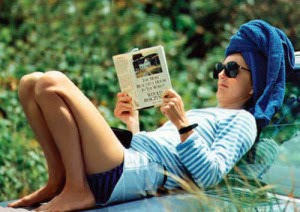 
To play along, just answer the following three questions ...

• What are you currently reading? Cop Town by Karin Slaughter.  I just picked it up and am very impressed by the action and pacing. Not high art, but so far it's an entertaining thriller about a family of Atlanta cops. From the jacket:

As a brutal murder and a furious manhunt rock the city’s police department, Kate Murphy wonders if her first day on the job will also be her last. She’s determined to defy her privileged background by making her own way—wearing a badge and carrying a gun. But for a beautiful young woman, life will be anything but easy in the macho world of the Atlanta PD, where even the female cops have little mercy for rookies. It’s also the worst day possible to start given that a beloved cop has been gunned down, his brothers in blue are out for blood, and the city is on the edge of war.

Kate isn’t the only woman on the force who’s feeling the heat. Maggie Lawson followed her uncle and brother into the ranks to prove her worth in their cynical eyes. When she and Kate, her new partner, are pushed out of the citywide search for a cop killer, their fury, pain, and pride finally reach the boiling point. With a killer poised to strike again, they will pursue their own line of investigation, risking everything as they venture into the city’s darkest heart.

• What did you recently finish reading? Mary by Janis Cooke Newman. Wow. Just wow. More than 600 pages written as if by Mary Lincoln herself. An intense and very moving book about a woman who saw history first hand and suffered much (too much) pain in her life. It wasn't a fun read -- far from it -- but it was so engrossing and well written that I enjoyed it nevertheless.