My home away from home 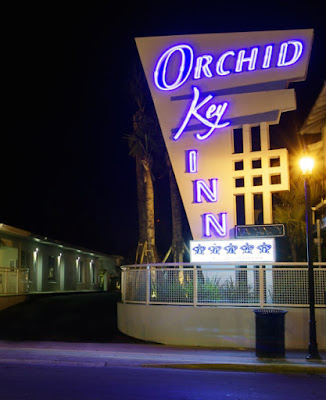 This year I stayed four nights at Key West's Orchid Key Inn. I was very happy there. Here was my routine ...

I woke up each morning and just lay there, sometimes drifting in and out of slumber. Then I'd shower, don a Cubs t-shirt* and go out and grab my continental breakfast -- usually a hardboiled egg or two, a mini cinnamon roll, yogurt and apple juice. I'd dine from a deck chair beside the pool, reading and looking up at the sky. There's something pretty spectacular about being a Chicago/snowy Yule gal and being able to look up and see this palm tree at Christmastime.

Then I'd put on my suit and swim laps. Back and forth. Breast stroke one way, back stroke the other. I liked the back stroke because it enabled me to hear the carols piped in from the poolside bar. Swimming while singing along with "God Rest Ye, Merry Gentlemen" is really cool. 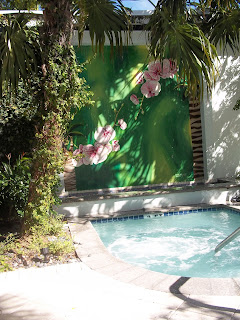 When I was sufficiently pruny and tired, I'd move from the small motel pool to the tiny whirlpool. It was pretty, tucked over there beside the bar, and, like the pool, almost always empty. Which meant I could pretend it was mine and mine alone.

Then I'd go back to my room and shower (again) and wait for Henry to come pick me up for the day's adventures.

The boy loved his fish 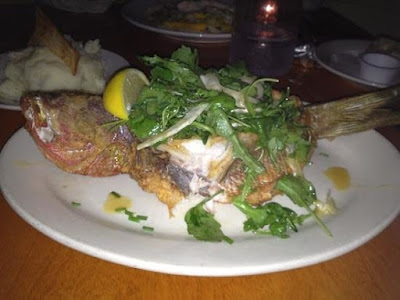 My friend Henry loved his birthday dinner at Sarabeth's. We had calamari and fried goat cheese and boneless yellow snapper. I enjoyed it as my first meal in Key West as we were seated outdoors, along the white picket fence, and watching the diverse denizens of the island wander by helped me decompress and feel at home again.

It annoyed me when Prince did it ...

... because it's unacceptable in anyone over 16.

I'm speaking, of course, of sliding into slang abbreviations. It's lazy* or pretentious.†

Right now I'm angry about this because of my oldest friend. Last Wednesday I sent her an email, letting her know "I'm beginning to unspool" and asking if I felt especially sentimental over Christmas I could call her.

Her response? Crickets. I heard nothing Thursday or Friday. I began to worry. After all, this is a woman who told me she would always be there for me. I let her know I was getting emotional over the upcoming holiday and she didn't respond at all.  Henry, my friend in Key West, knows about my oldest friend's battles with bipolar disorder and he thought I'd feel better if I called her and spoke to her. He knew I was beginning to imagine her literally frozen by depression, which has happened more than once over the last few years.

So I called her cell. It rang and rang before it went to voicemail, which was full. So I texted her and asked if everything was OK. She immediately answered me with:

So let's see ... She saw I called and just didn't answer. Then she responded with fewer characters than a Donald Trump tweet. Apparently she believes that the mere mention of her son's arrival for Christmas explains/justifies everything.

It doesn't. I was really upset Wednesday night over something I'll post about later, after I've processed it a bit more. I reached out to her and asked for her help. I got 31 spaces/characters.

This morning I got an email from her -- apologizing for being "MIA." Not for not being there when I needed her, ignoring me when she saw my name on her phone and needlessly frightening me. At least her email included entire words. 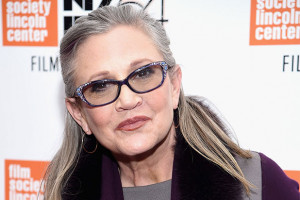 Carrie Fisher and I were very nearly the same age (just 13 months apart) and had similar senses of humor -- though my writing isn't as sharp as hers, and my life isn't as dramatic as hers, nor are my demons as fierce. So, when I heard this afternoon that she died, I was sad. She suffered a great deal and survived a great deal, all with her wit and perspective in tact.

I decided years ago that were I ever to write a memoir, I would call it, Just Over There. It's an homage to Carrie, who perceptively wrote of relationships, "Nothing is ever really over. Just over there."