Today's Happiness: One cigarette. It occurs to me, now that I'm home and looking back on my long weekend with my oldest friend. that she only had one cigarette from Friday afternoon to Sunday night. Since she's overweight and had a heart attack a decade ago, I'm very glad.

Sunday's Happiness: Self sufficiency. Sunday morning we woke up at the hotel by the airport where The Fest for Beatle Fans was held. Because of the time of my friend's flight (3:00), we were going to forgo any Beatle activities (even though we had tickets for Sunday) and just eat a leisurely brunch, check out and head home.
As were just sitting around gabbing, her cell rang. I went into the bathroom to give her privacy and, well, out of necessity. All of a sudden she calls out to me, "Gal! My flight's cancelled!" There was  genuine panic in her voice. I asked her why it was cancelled (was it weather related?), and she couldn't answer. She said she just quit listening and hit "save."

She handed me her phone and I listened to the message, wrote down all the new Monday flight information and the airline's number and told her to call them and confirm. After all, she had just been telling me that it was too bad she had to go home, that she had taken Monday off anyway. And we had tickets for Sunday's Fest anyway. So while she was confirming the flight, I was calling the hotel to get our room for another night. They turned me down because they had a massive cosmetics convention coming in Sunday afternoon, but that's OK. O'Hare is either the first or second busiest airports in the world. There are no shortage of hotels on that strip. We found another one quite easily.

We checked out, boarded a free airport shuttle that counted our new hotel as one of its stops, checked in, and boarded the shuttle back for more Beatledom.

I felt a little bad about it because I was missing my alone time, hadn't left enough food out for the cats, and really couldn't afford to spend this much money. But this long weekend in Chicago is her vacation for the whole year, she could afford it, and oh, what the hell! It was very good to see her and we had an extra day of fun.

Saturday's Happiness: Good Ol' Freda. When I was a little girl, I read in magazines like 16 that, if I wanted to write to The Beatles, I should address my letter to Freda Kelly. I thought she was a made-up person. I mean, I was a first grader in Chicagoland. It never occurred to me that any real parents would name their child Freda. So I figured letters meant for Good Ol' Freda were dismissed as fan mail from those NOT in the know.

Well, on Saturday, I saw Freda! She's real! And today she's an English grandmother (about 65) who wants to make sure her kids and grandchildren know that, for 9 years, she worked for the Beatles, answering their mail from their days at the Cavern Club through the height of their fame through their breakup. George's father taught her ballroom dancing. Ringo's mother invited her for Christmas. She went to a McCartney concert in 1991, having purchased her own ticket, and was spotted by Linda who invited her backstage for a reunion with Paul. What a charming lady.

Friday's Happiness: Laughter! My oldest friend returned to Chicagoland on Friday afternoon and we attended the Fest for Beatle Fans together. It's a rather silly affair, I admit, and the nerdiness was emphasized because attendees of ComicCon were staying at our hotel, too!
But oh, it was good to see her. I haven't laughed so hard in ages! It was all (here's that word again) silly, but it was joyful, too. Our favorite moment came when going through a teen magazine from 1964. Yes, of course, the Beatles were on the cover, looking young and sooooo cute. But a violator on the cover promised: "How YOU Can Be Their Girl" accompanying photos of (are you ready?) Rock Hudson, Jim Nabors and Richard Chamberlain.
It was nice to just laugh about inconsequential things, to reconnect to someone I've known since Kindergarten, and (for a third time) be silly. 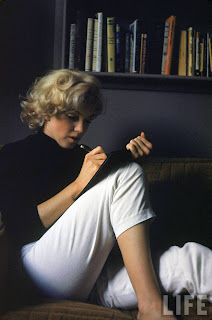 a : a familiar or usual setting : congenial environment; also :the focus of one's domestic attention <home is where the heart is>b : habitat


It’s a sunny Saturday and I’m thrilled because I’m doing what has brightened my summers ever since I was a little girl: going to a baseball game at Wrigley Field. As I enter through the turnstyle, I go from sunlight to a cool, humid, gray darkness. It smells like beer and hot dogs and salt and … history. I mean, it smells old in there. After all, it’s been the home of the Chicago Cubs for 96 seasons now. I locate the entrance to the section where my seat is. I walk up the plain cement steps and suddenly I see it.

The field itself, bathed in sunshine and blanketed in green. The grounds are green turf, the red brick walls are covered with ivy, the scoreboard is painted a flat, deep forest color.  The seats are painted same green and filled with Cub fans just like me. Oh, they may not look like me – after all, an almost dizzying array of demographics is represented – but we’re all there for the same reason: we’re here to cheer our guys and we’re hoping for a win.

As I take it all in my heart swells because I know I’m home.