His only child, his daughter, is taking him to court soon, forcing him to face the fact that he can no longer make decisions regarding his own life. She's right.

He has two caregivers, a pair of sisters he met through church, who have no health care training and speak little English. While they care for him compassionately, they are not qualified and, truth to tell, he chose them because he can boss them around and make sure he does what he wants to do, rather than what he should do for his health.

This was supposed to be a temporary arrangement, but it's gone on for two years. They do not monitor his meds, they do not require him to get exercise or see his doctors, they do not schedule regular activities for him ... He complains all the time about how much they cost, but no one knows for sure what he's paying them. I am in no way implying that they are intentionally exploiting him. I am grateful for the care they shower on him. But they are not qualified to be his 24/7 care givers, and they are also unable to view his world with a cynical eye because they struggle with English. My uncle is a very wealthy man, and now an old and sick one, which makes him vulnerable. They don't get that, and he refuses to. Here's a scary fact: the only place he goes regularly is the floating casino. He chose his new home based on proximity to "the boats," not to any of us.

He is terrified by this legal turn of events, phoning my mother, reading documents to her over the phone, asking her what this or that means. My mother has left a message for the lawyer on all these papers, asking for clarification. No one has spoken to my cousin, his daughter. My uncle is too frightened of pissing her off.

This is so shocking. My uncle has been, at many times in his life, a tough and angry son-of-a-bitch with a mean streak a mile wide. He has long enjoyed the status he believes his money gives him. For him to be passive, submissive, turning to my mother for help instead of screaming at his own damn lawyer (to our knowledge, he has yet to hire one) is frightening me.

And bears out that, as unpleasant as this turn of events is, it's time.

While my uncle has shown his ugly side to many in this family, I have no complaints about how he's treated me. He's always been good to me, kind to me in ways he views as small but meant the world to me as I was growing up. He bought me my first Beatle record ("Love Me Do/PS I Love You"). After he came home from Viet Nam, he let me bring him to school for "show and tell." (I remember him in his khakis, sitting on the radiator in my third-grade classroom.) When I first moved out, he took me to buy a stereo on time, showing me how to build a credit rating.

I can't say that his relationship with his daughter has been as positive. I commend her for all the work and care she has given him, or tried to give him. I had a difficult relationship with my own dad and can't imagine being in her position.

Because my uncle is proud, I am not calling him or my cousin. If he wanted to discuss this with me, he would. I'm gutlessly glad he hasn't, because I would have a difficult time discussing this with him without revealing that I agree with his daughter -- it is time for him to relinquish his freedom in exchange for managed care.

But with my mother's permission, I would like to send him a note. One of his major concerns in all this is his cat, Bennie. If he's suddenly institutionalized, will Bennie starve? Really. The scrappy bastard who played hardball in legal and financial dealings is unable to figure out how to care for his old tabby cat.

I'd like to reassure him that, as long as I have breath in body, Bennie has a home. I think that would comfort him, as a few years ago, when he was still more together mentally, he said he thought it was commendable -- not silly -- that I had a bank account and provisions exclusively for the care of my cats in the event of my own passing.

This is all so hard for my mother. He is still her baby brother, the only other survivor of their turbulent, long-ago nuclear family. She is worried that he may take his own life. (He has parted with his car, but not his guns.) I told her that if he does, that's between him and God. He is scared, he is suffering, and he's living with the certainty that while he will never get better, he will most assuredly get worse. I can't imagine what it's like to be him. If he chooses to exit by his own hand, I don't judge. For while I believe life is His to give and to take, who is to know that God means for people like my uncle to linger with a disease that would have killed him by now in previous generations? I just hope my uncle prays on his decision. I know he has a pastor he respects, but I also know my uncle has been avoiding more and more people. 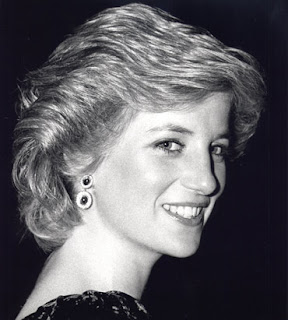 Strange, isn't it? I'm watching The Queen, starring Helen Mirren in her Oscar-winning turn as Elizabeth, yet it was clips of Diana that captured my attention. And made me sad for her, yet again.

I wish she was still with us. I'd like to think that she would finally be happy, finally reconciled to Charles and Camilla, finally making the most of her estimable gifts to move people. Maybe she'd be remarried, maybe she'd have the daughter she always wanted. Look at her ... wouldn't it be neat to think of her as the mother of the groom, playing a role in William's public and private lives?

It's no secret to anyone to who reads this blog that JBKO is my all-time heroine: a woman who lived an extraordinary life in her own way. While you can't examine Jackie's life without acknowledging the tragedies, the whole of her life strikes me as anything but tragic.

I hope Sunday is as good as Saturday

NO pain pills! Not a one. Not at all, all day Saturday. I may finally be emerging from this obnoxious thing. Being in a certain amount of pain, every day, since late January has been taking its toll on me. It's about freaking time I put this behind me!
Posted by The Gal Herself at 3/07/2010 01:13:00 AM 2 comments:

God bless them, every one

I just watched The Hurt Locker on On Demand and am sorry ...

• Sorry I watched it, because it is numbingly tense and violent. As it should be. Because it is about a real war, going on in a real place, where soldiers and civilians are really dying.

• Sorry I missed it at the theaters. Because if the tension and violence had this impact on me in my living room, I can only imagine what they would have been like in a darkened theater. While it's an intense, ugly and horrible subject, I need to confront it and think about it more because I am ...

• Sorry I don't often remind myself that there are troops facing this right now, and in my name, and I should.

In that way, this movie is like Precious, another Oscar-nominated film. There I lives I don't think of often enough, but I should. While I didn't enjoy The Hurt Locker, I appreciate it and am grateful for it. Because it reminds me of all those other souls I should be more grateful for.
Posted by The Gal Herself at 3/07/2010 12:07:00 AM 5 comments: