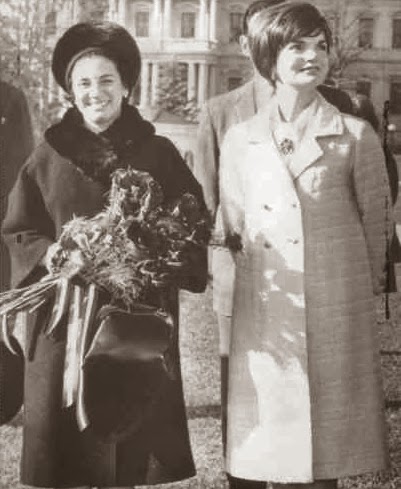 Today, when you see news footage of the French President arriving at the South Lawn, please notice the protocol. When the limo pulls up, the President, First Lady and their honored guest will walk a receiving line that includes the Vice President and Secretary of State. Then the band will play a few bars of "Hail to the Chief," followed the French national anthem, finishing with our national anthem. After a few formal opening remarks by both world leaders, President Obama will escort his French counterpart into the White House. Mrs. Obama will follow. (Since the French President just recently went through a high-profile divorce, there is no one for Michelle Obama to give flowers to, or enter the White House alongside.)

This tradition was introduced by the Kennedy Administration. Before the 1960s, a foreign dignitary just got out of his car and walked up to the steps to be greeted by the President and First Lady, who may have been in the doorway ... or not. The ceremony you see today was developed and fiercely adhered to by JBKO, who insisted the world see that we are gracious and respectful of our guests and proud of our beautiful White House and our heritage. Here she is in 1962, with the wife of the President of Honduras. She's amused by her toddler son, John Jr., who is watching the ceremony on the shoulders of a Secret Service agent.

Jackie was passionate about how the world viewed the United States. The logo treatment you see today on the side of Air Force One was also Jackie's. The plane has changed since 1961, but the familiar light blue nose, 'THE UNITED STATES OF AMERICA' in blue lettering and the US flag on the tail were all her.* And it remains to this day.

The more I learn about her, the more impressed I become. She was only 31 when she was thrust upon the world stage, and she seems to have seldom if ever put a foot wrong.

*Eisenhower's plane had a big flower on the side.