I can do this job! 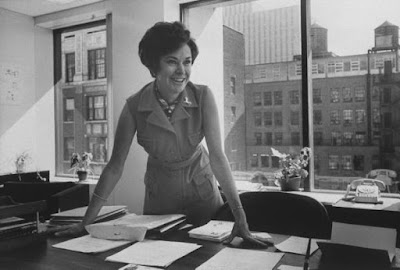 My boss is in Los Angeles this week, shooting a TV commercial. He was needed here in Chicago at a rather sensitive mini-summit with another agency. I was shocked when he selected me to go in his place.

I was nervous. This other agency is our competition. We handle a little over 60% of our client's advertising budget, this agency handles just about 25%. (The other 15% is done by a shop that specializes in marketing to African-Americans.) They want a bigger part of the pie, we want to shut them out. And yet, for events like this, we have to "make nice," for our client has made it clear that they want coordination and cooperation between their major agencies.

So this meeting mattered.

And I did well! So well, in fact, that on the way out, the account director from the other agency asked if he could give me a hug!

A lot of this is because our new account director, AD, likes me, and so the halo on my head is illuminating everything.

And part of it is that I'm really very good at thinking on my feet. I have a passion for my client's business and an understanding of how advertising works at a granular level.

Or, as one of my coworkers likes say, "The Gal isn't in the weeds, she's burrowed beneath the weeds. She's in the mud!"

Our American political season goes on too long. I know this because I'm a news junkie, and even I am already exhausted.

Two things are bugging me especially.

Donald Trump, of course. "The system is rigged! It's not democratic!" Of course it isn't democratic, you orange-skinned combed-over asswipe. This is a republic. I don't know what New York school Trump went to back in the day, but in my provincial grade school in the Midwest we were taught that in our system of government, "power resides in elected individuals representing the citizen body." So we vote for the delegates and at the convention, the delegates vote for us. Is the primary system ridiculously over complicated? Yes. But has it been this way for decades? Yes.

Question: How many primaries did Hubert Humphrey win in 1968? Answer: None. And yet he was the Democratic Presidential nominee. Donald Trump was old enough to vote in 1968. What's his excuse for not knowing this? HE HAS NONE!

Bernie Sanders supporters. "I'll never vote for Hillary. Ew! Ick!" Your guy lost. Get over it. Your guy didn't lose because Hillary is satanic. He lost because she got more votes -- in mostly ethnic urban enclaves, where his message simply didn't resonate. (And saying shit like, "Poor people don't vote," doesn't help.) And yes, you will vote for her. Because like all right-thinking Americans, you are afraid of the aforementioned orange-skinned combed-over asswipe, and what his ascendancy says about us as a people.

Please note: I am not aiming my ire at Sanders campaign volunteers. You guys have my deepest admiration. I worked for Walter Mondale, Bill Clinton, John Kerry (and I'm prouder of the hundreds of hours I devoted to the Kerry campaign than I am of anything else in my life) and Barack Obama and so I know. I know you dialed ... and emailed ... and hosted house parties ... and attended viewing parties ... and rang doorbells ... and made signs ... and held those signs over your head in the rain ... I know and I admire you and I'm grateful to you. Without volunteers, campaigns don't run, and without campaigns, America doesn't work.

I'm talking about the angry social media mavens who stuff their faces with Doritos while pounding away at their keyboards. "Ew! I hate her and her fossil fuel consuming friends!" You're simply not serious people. Angry ones, yes, but not serious.

Watch. When it's really all over for Sen. Sanders (possibly in June, after California), the true believers will cry and ache and then go over to Clinton headquarters. Oh, yes, they will. Because they believe a woman's right to choose and LGBT rights and a culture of inclusion are too important to trust to the GOP. And because when you're going 100 mph, it's hard to stop, and when you've been working hard for something, it's hard to just walk away. I know this -- in 2004, I watched the "Deanie Babies" (Howard Dean's volunteers) join the Kerry campaign, and in 2008 I saw Hillary Clinton workers join Barack Obama's campaign.

There. I feel better now. I think it's time for me to turn off MSNBC and turn back to the Cubs vs. Milwaukee.