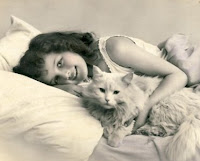 My oldest friend and I both love our cats. We have since we were little girls (back then, hers was named Smitty, mine was Tommy). It's the first of many bonds we have shared since Kindergarten.

When we were in Las Vegas, less than two weeks ago, she knew how worried I was about my old boy, Joey. I mentioned it to her often. As we were leaving, and she bemoaned returning to reality, I said I'd be willing to stay a day longer if only I wasn't so worried about my ancient tomcat. That was Monday.

Wednesday I sent her an email, letting her know how concerned the vet was about his condition and how worried I was about getting the results of the bloodwork. I heard nothing back.

Thursday, she sent a little text wishing me a happy Thanksgiving. Friday, nothing. Saturday, nothing. Sunday, nothing, Monday, nothing. Tuesday, nothing, Wednesday nothing, Thursday afternoon = I get a chatty email about how she has to meet with her counselor at the program she's in for her depression, and how much she's enjoying the Al Capone book I recommended to her while we were in Las Vegas.

Not a word about Joey. No question as to how he's doing. Also, no mention of the protests that went on throughout the Loop after the Laquan McDonald video was released. I know those demonstrations got national press coverage and she knows I work in the Loop.

I was hurt. I was offended.

I resent the Wednesday (day before Thanksgiving) email and said, "Was surprised when you didn't respond."

She replied she must have dumped it without reading it, that she's glad Joey is doing better, and she understands about the Loop because of the terror attack in San Bernadino.

Um, no. Joey is not doing better. Joey is dying. And no, she doesn't understand about the Loop because San Bernadino is an hour from where she lives and works and I'm in the Loop every day, twice a day. (And added that I was happy she was enjoying the book and that Robert St. John was my favorite character in the Capone saga.)

That was yesterday afternoon. I haven't heard a thing since.

I don't know what to do with all I'm feeling.

I know that she's fighting depression. Biochemical depression that makes it almost impossible for her to function. She's learning to deal with it. She's adjusting her life to meds and positive self talk. She's working on it. I know she is. I appreciate it. I applaud it.

On the other hand, she's become monstrously selfish. She says she'll always be there when I need her. On the other hand, in October, when I called her, she didn't pick up and voicemail was full and she responded to my SOS text by saying she was out to dinner and would call me if she didn't get home "too late." She never called me. Now this.

So she can't take my calls because she's too busy and she dumps my emails without reading them.

I don't know what to do. I don't know how to handle this. I love her and I don't want to put a foot wrong. I want to stand up for myself without hurting her.

I wish I was back in therapy myself, just so I could ask a shrink what to do.

It changes. This year it's "Christmas Holiday." There's an urgency, an eager anticipation that really appeals to me this year.

While the song may change year-to-year, my favorite holiday artist never does. Andy Williams. Between Thanksgiving and New Year's Day, I want to hear Andy Williams every day.

When I was a kid, I fantasized like mad about spending Christmas with Andy as his family. I knew them from his annual holiday show: they were a big clan, they sang, they never fought. Of course, in 1976 the ex-Mrs. Williams shot her lover, so I guess no one is as they seem.

But let's not allow that pesky reality to harsh our holiday buzz!

Day 3: The Truth Is Out There

December 3: How/when did you find out Santa isn't real

Throughout the Christmas break from Kindergarten, I started questioning. 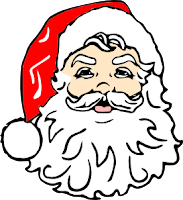 •  Why does Santa use the same wrapping paper and gift tags as my mom?
•  Why did the kids down the block get so much less? Does Santa give less to kids in big families?
My mother remembered it as me "challenging" her, but at this point I still believed. I wanted answers, that's all. For the following Christmas, my mom purchased separate "Santa paper" and the gift tag became just squares of paper that she wrote with her left hand. In retrospect, I'm touched by how much work she put into maintaining the illusion.

Alas, by then (first grade) the jig was up. Too many kids at school were starting to question at well. I don't remember their specific queries, but they were different than mine. That meant there were a lot of unresolved issues! For me, the last straw was the adhesive where price stickers had obviously been. If elves made this toy, why does the package have a price sticker?

So, just before Christmas in second grade, my parents sat my sister and I down in my room and told us the truth. My dad -- in a move remarkably thoughtful for a man who was so uncomfortable parenting -- read us a condensced version of the New York newspaper's "Yes, Virginia, There Is a Santa Claus" editorial.
"Yeah, yeah," I was thinking. "Now get out of my room. This is weird."

My older sister, however, was a different case. A third grader, remember. She was shattered. She cried, really cried. Red face and snots.

It was not the first time I thought she was an idiot.

What I wanted then, I still want now: Homemade gingerbread! Men would be optimal, but I'll happily accept a gingerbread loaf or plain old round cookies.

My niece is an exceptional cook and simply refuses to make it for me. She says the kind I'll "settle" for are not the type she wants to make and she simply doesn't have time to make them the way she wants to. It also amuses her that I want them so badly. Last year she gave me ginger beer. The year before that it was a box of a gazillion little store-bought gingerbread stars. I don't recall what she did in 2013, but I'm sure this year she'll come up with yet another way to taunt me.