Water seeks its own level

I'm so glad I live in this community! It was sunny, clear and cold for this time of year (45º). I had to pick up prescription cat food at the vet's office and I walked. It took about 30 minutes and it was lovely. The sidewalks were, of course, empty except for joggers and people walking their dogs. Yet I felt so connected to my neighbors. 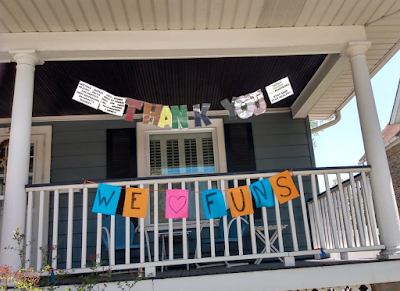 Doesn't it make your heart happy to think of the fun this family had, making these positive and supportive decorations?

However, just as water reaches its own level, so does sewage. My vet tech and I caught up on life as she rung up my pet food. I hadn't been there since mid-March, something of a record for me! We were both in our masks. Mostly we talked about Reynaldo, but naturally the unusual protocol for picking up the food -- I had to ring the bell to be let in -- came up. I thanked her for wiping down the pen before I used it. She told me about her sister, who lives in downstate IL near the KY border. Sis was waiting in line to enter a grocery store. Everyone in line was wearing a mask except one woman, who had a Confederate flag bandana around her neck that she could easily have pulled up to cover her nose and mouth.

Sis asked the woman if she wouldn't mind putting on her mask. "Yes, I would! My body, my choice." It was obvious she was just waiting for someone to engage her so she could use that line.

A small, white haired woman asked her to "please, put on your mask to protect me." Can you guess what Ms. Confederate Flag said? "No. My body, my choice."

It's amusing that Ms. Confederate Flag was willing to wear her offensive bandana as a mask inside the store. She doesn't care enough about her "rights" to risk roughing it without toilet paper.

And by the way, it isn't her "right." As Americans have been saying since the 1880s, "Your liberty to swing your arm ends where my nose begins." Our neighbors have a right to feel safe, too. And oh, yeah, masks are the law here in IL. The Land of Lincoln. You know, the side that won the Civil War. The Confederate flag was purposely provocative, too.

Enough about the silly live-free-or-die, fight-the-tyranny, I-blame-Obama's-deep-state crowd. I'm glad I'm here. Where we care about each other and our country. Where I belong.


1) This week's featured artists, The Intruders, sing that they don't know how their mama made it through the week without ever getting a good night's sleep. How did you sleep last night? I slept OK, I suppose. I woke up with a headache, though. One of those where your head just feels stuffy. I think it's from dust and dirt and all the other airborne stuff kicked up by the freight trains that run just nearby. Part of why I chose this condo is the proximity to the tracks. Really, my commute couldn't be easier. But there's a downside to that convenience. 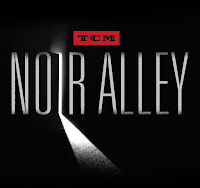 2) The Intruders performed this song on Soul Train, a syndicated show that ran for more than 3 decades. What show do you try never to miss? TCM's Noir Alley on Saturday nights. I love Eddie Mueller's introductions to these classics. He really knows his shit and I always end up learning a lot. I'm nowhere near caught up. My backlog of Noir Alley movies have contributed to those "space is limited!" warnings I get on my DVR.

3) On Soul Train, the Intruders wore solid black shirts beneath their brightly colored jackets. Black, white, khaki, navy and gray are considered neutral colors, because they go with everything. If we were to check your closet, which would we find you wear most often: black, white, khaki, navy or gray? Navy. Lots of navy! I wear so much blue that I even ordered my covid19 masks in blue.

4) Especially for Mother's Day: Access Hollywood named Carol Brady of The Brady Bunch TV's #1 mom. Who is your favorite TV mom? When it comes to TV, Lucy is almost always my favorite answer. I love the episode where Little Ricky has his tonsils out. In the cab (offscreen) Lucy comforts the toddler by assuring him that, when he wakes up in his hospital bed, she will be there. After he's admitted, the staff tells Lucy she cannot spend the night in his room. Oh yeah? Those starched hospital nurses don't know who they're dealing with! Lucy will not be deterred. As she keeps reminding everyone, "I promised!" In many (OK, most) situations, Lucy Ricardo may have been a child herself, but she was a good and loving mom.
5) Mother Winters always gave Sam peppermint tea to calm her stomach. Do you have any tried-and-true home remedies to share? Limit yourself to saltines and ginger ale after tummy trouble. I learned that my own mom.

6) Sam's mother always tips 15% in restaurants. Sam has worked in food service and is more judgmental, tipping between 10% and 25%, depending on the quality of the service. What's your tipping policy? Are you more like Sam or her mother? How do you handle tips for carry out or delivery during this Covid-19 crisis? Under normal circumstances, I'm more like Mrs. Winters and tip between 15% and 20%. During the crisis, I'm more generous. I'm lucky to be working and I know my favorite small, local businesses are suffering.


7) When the tip of her shoelace becomes frayed, Sam's mother snips off the end and then paints the tip with clear nail polish. Good as new! Sam thinks that's crazy because you can just buy new laces for less than $2. Are you more frugal like mother or spendthrift like daughter? I'm terrible with money.

8) Mother Winters loves how french vanilla smells and burns her Yankee Candles all year around. Do you use scented candles or air fresheners? I have an Airwick Freshmatic that "automatically delivers a burst of freshness" near the cats' litter box.

It can hit anyone. Even Gregory.

Friday I heard about Gregory. He's tall, slender and handsome. And sophisticated -- Gregory knows which wine to order and can explain the three grades of cashmere. And very depressed. The pandemic has thrown him for a loop.

He worked with John and me at the beginning of our careers, back in the long-ago 1980s. He and John have remained close. I see him occasionally, but dependably for our "orphans Thanksgiving" celebration in November.

Around 1990, Gregory decided advertising wasn't for him and switched careers. He became office manager for an established, family-owned real estate firm on the North Side. They were pleased by how organized he is and, frankly, how good he looked at the front desk. He was one of the few non-family employees, but they treated him well: health care, vacation time, retirement fund.

Then, after nearly 25 years, they made a change. "The old man" retired and the next generation decided that they no longer needed anyone at the front desk or to manage supplies, appointments and vacation schedules. The real estate agents could do Gregory's job themselves from their smart phones. He was let go. As he likes to say, "Being like family and being family are two different things."

So now here he is, retired. On their timeline, not his own. He's 67 or 68 years old. Healthy. Bored. He's spent the last couple years taking short trips to family and friends in Wisconsin, Indiana and Ohio. Now on a fixed income, this man who owns his own tux takes Megabus. It's been an adjustment. He's been making noises about signing on with a temp agency -- to augment his income and to feel useful again.

Enter Covid19. Gregory quit leaving his apartment altogether in mid-March. He has his groceries delivered. He monitors the media a little too closely and is concerned about the spike in deaths and lack of testing. Hell, we all are. We all wish Donald Trump had handled this situation more wisely. But we get on with life as best we can while observing the commonsense rules in place to protect us.

Not Gregory. He's filled with anxiety. He feels vulnerable. It took John days -- literally, several calls over several days -- to convince Gregory it was OK to meet outside and visit together on public benches. They chose a date (Tuesday) and time and then Gregory cancelled it, worried that it wasn't safe.

Finally, Thursday, the old friends got together. They wore masks. Each man had his own bench. They looked at the green leaves and felt sun on (at least part) of their faces. Gregory couldn't relax, and after less than 30 minutes, they each returned to their apartments.

But John is going to try again next week. He's a good friend. But I knew that.

What I didn't realize was how fragile anyone's mental health can be. I was aware of goofy conspiracy theories embraced by the silly live-free-or-die, fight-the-tyranny, I-blame-Obama's-deep-state crowd, and that's its own special brand of crazy. But Gregory is the first person in my circle to be so caught up in his own fears and concerns that he's nearly paralyzed. I must remind myself to be more sensitive to everyone I interact with. Some of us are suffering.

A song that makes you happy. (Play along! Click here for prompts.)