Do you believe that Walt Disney is really frozen? No

Do you believe its easy to forgive and forget? No, though I believe it's worthwhile.

When you feel like running away from it all who do you call? I don't call, I click. Expedia.

Is there anyone who knows your entire life story? No.

Have you had to have stitches at all in the last year? No.

Which is coming next: Christmas or your birthday? My birthday! 11/22. My favorite color is Cubbie blue. Start shopping now!

What time did you go to bed last night? Late

When did you get up this morning? Early

When was the last time it rained? Before dawn one day last week. I appreciate when it rains overnight. Very thoughtful of Mother Nature.

Are your finger nails painted at the moment? Toe nails, yes. Finger nails, no.

Do you ever go hunting/fishing? ICK! No.

Did you have an imaginary friend as a child? Good goobies, yes. I had a vivid imagination. It amuses me to recall that I used to pretend Ann Marie was my best friend.

Which parent do you look most like? Neither one. Though I do look a good deal like my aunt on my dad's side.

Do you have any friends who are famous?  Just Marlo Thomas.

Do you use eBay to buy or sell? Yes. Is there anything else you can do there?

Is music a daily part of your life? Yes.

Is your self esteem high or low? Depends on what area of my life we're talking about. 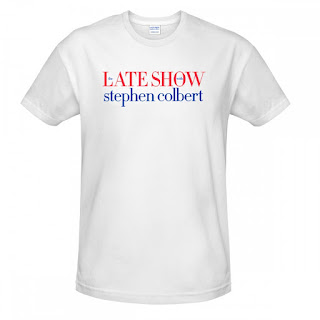 Day 26: What made today worthwhile?


I had lunch with my nephew and gave him his birthday present. This shirt was the centerpiece. He loves Stephen Colbert so much. I also got him M&Ms personalized with his picture and cheese-flavored salt twists made to look like worm larvae. And a little cash.

We celebrated at his favorite restaurant, a glorified hot dog stand that also sells pizza. On the way over, we stopped in front of a stranger's house for photos. Him with a gift bag, a dumpster and some decorative gourds. It amused him. "People will ask, 'whose porch is that?' and I'll say, 'I don't know.'" That amused him enormously.


Over lunch we talked about his new hero, Bernie Sanders and Hillary Clinton. I told him I still suspect the GOP nominee will be Marco Rubio, and that seemed to make him feel better. The anti-Muslim, homophobic rhetoric of Ben Carson, Ted Cruz and Mike Huckabee was very disturbing to him. I like that he thinks about this stuff, and from such a heart-centered way.

He's proud of how well he's doing in his AP courses, but the class he's enjoying most is English. They're reading A Separate Peace. It made him happy that I remembered and loved that book, too.

He's smart, he's good, he's funny. He feels the same way about me. No wonder time spent together felt worthwhile.