Before I went to bed Sunday night, I learned that September 2 is an important day for Cub fans:

Anthony Rizzo has been cancer free for 11 years.

When our first baseman was 18 years old, he was diagnosed with Hodgkin's Lymphoma. This kid was not only worried about his future as a ball player, he was scared for his life. And for his family. His grandma was already battling breast cancer.

After six months of chemotherapy, his tumors were gone. He was not yet well, but he was in remission. Weeks later, his grandma died.

That period of his life taught him that cancer doesn't just affect the patient, it has an impact on the entire family. Now that he's a star, he gives tirelessly to groups that support children with cancer and their families. Here in Chicago, we are familiar with his work with Lurie Children's Hospital. In Florida -- where he grew up and lives in the off-season -- his efforts benefit Joe DiMaggio Children's Hospital and the cancer center at the University of Miami.

Anthony Rizzo is a hero. Happy Anniversary, Rizz! You're my all-time favorite Cub and I am so grateful that you're OK and you're ours. 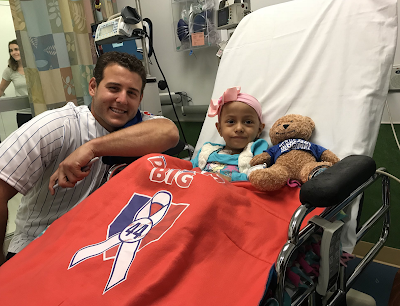