1) This song begins by stating that he met her on a Monday and his heart stood still. How did your past week start? It may be a lot to expect you to report that you met someone who made your heart stand still, but did anything noteworthy occur? Well, I did discover something that made my heart stand still, but it wasn't a good thing. I found out that my company is thinking of reorganizing ... again ... and I worry about what this means for my future. (Gulp!) I'm terrified of being unemployed at this late stage of my career.


2) While making hit records, Shaun Cassidy also starred as Joe Hardy on the Hardy Boys/Nancy Drew Mysteries. The Hardy Boys and Nancy Drew books have been popular with generations of American kids. Were you a fan? I was a rabid Nancy Drew consumer. Which is why I was so tickled to see this manual typewriter when I visited the Soboroff Typewriter Collection in 2015. (Yes, I'm geeky enough to actually go look at old typewriters, and then to be thrilled.) There, along with Truman Capote's and Tennessee Williams' and Ernest Hemingway's, was the typewriter used by Carolyn Keene to write about Nancy, Bess, George and Ned. This typewriter is too modern for the first book, which was written in 1929 and published in 1930. But it's still pretty damn cool. 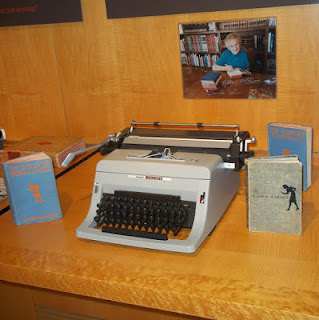 3) Shaun went to Beverly Hills High School. Over the decades, BHHS has had many good footballs teams. Do you remember what sports your school excelled at? We had one very good basketball team when I was a junior. We actually made it to the Sweet 16! But that was a rare bright spot. Our teams were otherwise pretty dismal.

4) Shaun followed his older half-brother, David Cassidy, into TV/records/teen stardom. Do you have siblings? If yes, what career paths did they follow? One sister is an accountant, the other is a grade school lunch lady.

5) His middle name is Paul, after his maternal grandfather. Tell us something about one of your grandparents. One of my grandmothers was such a do-er. She sat on church committees and was an election judge and stayed involved in Girl Scouts long after my aunt was grown. I wish I had a portion of her energy.

6) Shaun's mother, actress Shirley Jones, reports that he was more than 3 weeks late and born by Cesarean. Have you heard family legends about your arrival into the world? I was born at the stroke of midnight. Legally, midnight doesn't exist, so my mother got to choose my birthday. Did she prefer 11:59 PM on November 21? What about 12:01 AM on November 22? She chose the latter. Once, when I had my chart done, the astrologer was entranced by this. I was born on the exact cusp of the cusp between two signs!

7) "Da Doo Ron Ron" was originally recorded by The Crystals. Can you think of another song that has been a hit by more than one artist? "You Can't Hurry Love" by Diana Ross and the Supremes in the 1960s, and then by Phil Collins in the 1980s, and then by The Dixie Chicks in the 1990s.
8) In 1977, when this version of "Da Doo Ron Ron" was popular, Steve Jobs and Steve Wozniak incorporated Apple. Are you Mac or Android? Laptop is a Mac, phone is Android.

9) Random Question: You're exhausted. You collapse into bed and are about to drift into slumber when you hear the drip-drip-drip of the bathroom faucet. Would you kick off the covers and go turn it off? Or would you stay in bed, letting it drip until morning? I like to think I'd get up and take care of it. But I'm not sure I would.