A lot of hurt inside these walls 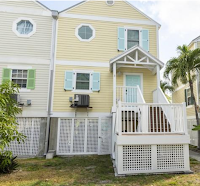 This is not Henry and Reg's home. But theirs is so similar, I bet it was built by the same contractor. Ground level is the garage and the laundry room. Take the stairs up to the front door and enter a nice, big kitchen. Pass the 1/2 bath to the living room and a little patio, perfect for a table and four chairs. In better days, we had Christmas dinner back there. Upstairs are the master bedroom, a guest room and a full bath.

There are differences, though. Henry and Reg's house is beige with brown shutters and a white front door. Theirs has (non-functioning) central air and a little Arctic Air personal cooler next to each bed. And lots of pain. Their home is 880 sq. ft. of hurt.

Quarantined there right now are Henry, Reg and Reg's dear old friend Patrick. It is not going well. Henry has gone off the rails. The disruption caused by the pandemic, plus his traumatic brain injury,* have made him exceptionally difficult. While the rest of the library staff was furloughed, Henry was put on medical leave. This gives him more time off with pay because it excuses him from returning to work remotely, as the other employees will be expected to do. Working from home requires Henry to use a computer program that leaves him frustrated and angry, so placing him on medical leave was a nice, kind thing for his boss to do.

Henry is furious. He insists he's been "diminished" and "singled out" by medical leave. It is all he thinks about. Reg has explained all the reasons why this is a good thing. So has Patrick. I know his friend, Violet has tried, too. But he refuses to (or can't) accept this. Reg found that Henry has unwisely emailed the human resources department to complain about this.

When Henry called me Thursday to complain, I tried to change the subject. I told him how our community ice rink -- where children take skating lessons in the winter -- has been converted to a morgue to prepare for the bodies that will need to be preserved until funerals can be held. I was sure this would shock him, as it did me, or at least give him pause.

"That is too bad, but what I want to know is, will my pay be different from everyone else's? I asked my boss but he deflected me ..."

I told him that I found this conversation difficult because, as much as I want to help him with the situation, I simply can't. I'm in another state, I work in another industry, so I have no advice or suggestions. He said he understood, but continued to talk about his boss. "Miguel is messing with the wrong queen," he began. "I have information on him. I have seen him commit infractions ..."

I was tempted to reiterate that his boss has done him a favor in this situation, but I didn't bother. Instead I put my phone on speaker and let him go on and on about how awful this is, how unfair this is, while I literally changed a light bulb.

When I was done, I waited for him to catch his breath and then brought up Easter. Hallelujah! For a moment I got him to think about something else!

"Yes, tomorrow is Good Friday," he acknowledged, and then talked about this weekend's church services, before returning to, "What I want to know is, will my pay be different from everyone else's? I asked Miguel but he would not answer me."

Reg and Patrick have been living with this. 24/7, as Henry seldom sleeps. He has exhausted them.

To Reg, Henry says, "You are my husband. You are supposed to care about me! You should call Miguel and defend me." Reg responds by explaining (again and again) that medical leave is really beneficial, and so he will not lift a finger to have it changed. Henry accuses Reg of being lazy and simply not caring

Reg tries to explain that everyone they know is suffering through this pandemic. That local government has more to concern itself with right now than how Henry's layoff is classified. "You do not care that I have been singled out and diminished!"

Patrick tries to distract Henry. It doesn't go well. Patrick is into fitness, and every day asks Henry to join him for walks. After all, in Key West it's sunny and 80º+. Why not take advantage of the great weather and empty streets? Henry refuses. He is too achy and tired from worry about his work situation. Patrick makes small bowls of food for Henry -- cereal, soup, a green salad -- and insists he eat at least some of it. They fight, but Henry has lost 40 lbs. in the last year and a half. Patrick is concerned about his health ... and his drinking. No exercise, little food but plenty of booze are not the recipe for good health. Yet Henry slips out at night to purchase wine. Patrick tells him that liquor interferes with his medication. Henry responds that he must drink because he is so upset about "diminished" and "singled out" by medical leave.

"Why is this happening to me? Why will no one stick up for me?"

Patrick explains that no one can afford to deal with this right now, that the county and state are dealing with massive health and financial issues. They argue. Henry doesn't cry with Patrick, he gets mean.

"I have degrees," he slurs. "I speak three languages. You are just a waiter! You are not smart enough to understand my life!"

Patrick and Reg go to sleep. Henry phones friends. The next day, it all begins again.

I must stress this: Henry was not always like this. He used to be indefatigably kind and curious about the world around him. His accident robbed him of all that, and left him like an angry toddler.

I have spoken to Patrick regularly during this crisis. About him, about me, and naturally about Reg and Henry. "This isn't sustainable," he says. I agree. Patrick worries that Reg will leave Henry, and that Henry can't survive on his own. I worry, too, but not about that. What happens in June, when hurricane season starts? If a storm heads for Key West, Henry and Reg will be locked inside again, without the option of rushing to Publix and the blood pressure monitor. Or what if the county decides enough is enough and lets Henry go? Can he function without the stability the job gives him, and the all-important health insurance he needs?

Patrick and I agree Reg should see a counselor, to learn caregiver coping techniques to diffuse the situation. Reg is resistant. I don't know why.

Everyone in that house hurts. Everyone is worried and scared. It is a tragedy.

*If you read the section on Behavioral Impairments,  you'll see a portrait of Henry.