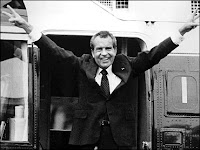 What's the most recent thing you have learned? I knew that Watergate had a huge impact on my world view, but I didn't realize how it effected my vocabulary. Two phrases I use all the time at work were introduced during the Watergate scandal.

Plausible deniability. The term used in the Executive Branch when wanting to distance themselves from an action taken by underlings. They may have clearly wanted the dirty trick or break-in to occur, but they didn't want any evidence that they knew about it in advance. I use this at work, when people around me want to rewrite copy that's already been approved by the client and their attorneys. I tell my coworkers I don't want to know about it so I can maintain my plausible deniability.

Twisting in the wind. When Patrick Gray had been nominated for the head of the FBI, John Ehrlichman, Nixon's White House Counsel, intentionally let the confirmation hearings go on ... and on ... and on ... even though everyone in the Executive Branch knew Gray would never be confirmed. According to the infamous tapes, Ehrlichman felt it would be better to let Gray "twist slowly, slowly in the wind," like a body at the end of a hangman's noose, because at least while the hearings were going on, no one was talking about Watergate. When I feel vulnerable and completely without support, I say I've been left twisting in the wind.

I learned this stuff while reading Evan Thomas' riveting, and so sad, biography Being Nixon. 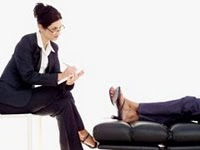 What are you questioning? The care my oldest friend is receiving, 2000 miles away in Los Angeles. Her shrink has diagnosed her as bipolar and resistant to medication. An MD with a prescription pad, this doctor has her on a cocktail of at least three medications. This is in addition to the pills she takes for her heart and the antibiotics she takes for the tenacious infection she contracted when hospitalized a few years back.

Here's the thing: she's not doing any better. In fact, she's worse. With all those drugs coursing through her veins, she's no better.

I've told her I think she needs a new team. She needs a GP with balls, who can oversee her treatment in its entirety. She needs a second opinion on the bipolar diagnosis. She needs hope. She needs to know every morning when she wakes up depressed that this isn't the way the rest of her life will be.

I know this may sound presumptuous from someone who has no letters after her name, but I have known her since we were in Kindergarten and I REFUSE to let her go under. My instinct is powerful, and it's telling me she needs more and better than she's getting. I'm going to keep questioning and keep challenging until I see improvement.