We get it, Chuck. We've always gotten it.

I just saw Chuck Todd interview Sen. Amy Kobuchar on Meet the Press. He asked her if Democrats assume some responsibility for decades of sexual harassment because of the pass he thinks Bill Clinton received in the 1990s.

First of all, Bill Clinton didn't receive a pass. He was impeached. Yes, I know he was charged with perjury and (are you listening, Donald Trump?) obstruction of justice. But if you ask anyone on the street why Bill was impeached, you'll hear, "Monica Lewinsky." The 42nd President of the United States' legacy is forever tainted.

Second, women have always understood how ugly Bill's behavior was during the Lewinsky scandal. Here is what I wrote about it in 2010.

The prompt was to write a letter to "a hero that has let you down." I haven't changed a syllable. I don't have to. 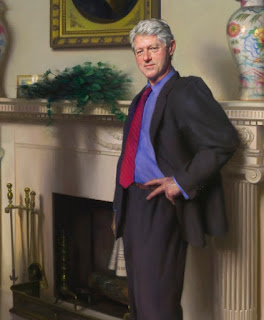 Every time I think of you, that old Laura Nyro song starts playing in my head. You know the one, "BILL! I love you so, I always will ..."

And I did and I do. But you broke my heart.

It wasn't the infidelity that bothered me. Hell, I'm a Kennedy girl. I grew up believing we can and should separate personal behavior from public performance.

It was the way you allowed your good ol' boy horndog behavior to seep from the personal to the public that makes me nuts. You did a young and emotionally vulnerable girl in the Oval Office! How did you think you were going to get away with that? And I don't for a moment think you cared for that poor kid. You saw more interesting, more attractive women every day on the rope line in front of the White House (remember, this was before 9/11 when we could tour 1600 Pennsylvania Avenue). You chose her simply because she was there, and you did her simply because you could. And then you not only lied about it, you demeaned her ("I never had sexual relations with that woman ..."). The imbalance of power between you two and your fates appalls me. YOU were the most powerful man in the free world, YOU were the one with a wife and daughter (a daughter not that much older than your mistress). Yet today you remain one of the most popular men on the planet, and she's a punchline, a synonym for oral sex. How is that fair?


You're a good man and you have done a lot of good. But you had the capacity to do more and be a great man. I believed in you, and you let me down. You let the nation down. And you let yourself down. Every account of your presidency will include the phrase, "impeached by the House of Representatives."

And yet ... and yet ... When you talk about the Clinton Global Initiative, I'm transfixed. When I watched you walk Chelsea down the aisle, I got misty. Every time you have a health problem, I say a little prayer.

So even though you broke my heart, I love you so, and I always will.