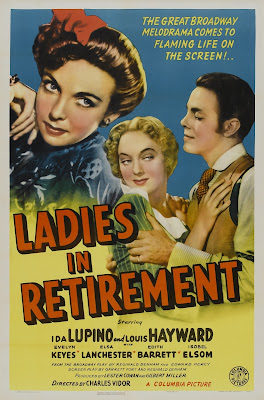 Ladies in Retirement is an interesting flick. Ellen works for a retired showgirl, who can afford to pay for a live-in companion out of her handsome inheritance. Ellen is industrious and almost completely humorless. She really needs this kind of crappy job in the remote English countryside because she's the sole support for two older sisters who live in London. Her sisters are completely dependent -- "dotty" -- and are about to be thrown out of their boarding house. Ellen is told if she doesn't come for them, pronto, their landlady will have their institutionalized.

She loves her sisters desperately and can't allow them to be hauled away. Ellen brings the two nutcases to the countryside cottage for "a visit," but has every intention of keeping them with her forever.

After just a few days, Ellen's boss and the owner of the cottage wants those two nutty sisters gone. And Ellen with them. Which would leave all three sisters broke and homeless.

Ellen cannot allow that to happen, and so she thinks about the unthinkable.

I enjoyed Ladies in Retirement well enough. I like mysteries that unfold amid the moors, where the skies are filled with fog and gnarled, leafless branches. I have two "dotty" sisters. There was a slick and charming leading man. There are even charitable nuns who show up when they're needed most. And it's always fun to discover a new classic.

But I kept my reservations to myself. First of all, last night's meetup was not well attended, and our moderator puts so much work into them. I want him to know I appreciate him finding this chestnut and putting together the presentation. Secondly, he has almost unlimited admiration for Ida Lupino. Chacun à son goût. 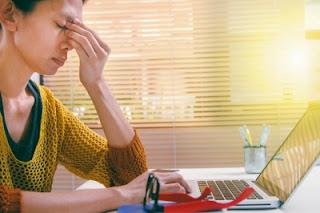 I'm OK (she said, knocking Formica). But so many women around me these days aren't!

Sad. Poor Nancy. Everything was going so well in her life. New job that she really likes, an appearance on Jeopardy!, her daughter accepted to the college she wanted, her son turning his life around (again/finally). We were supposed to get together this Sunday, but she wouldn't commit. Finally she told me why. Her father -- who has been successfully battling cancer -- suddenly took a turn for the worse. He's in hospice. With Father's Day coming up, this is very emotional for her and her daughter. She isn't sure it wouldn't be wiser for her to stay home Sunday. I told her by all means, do that, and to just reach out when she feels like socializing again.

Sadder. Have you ever slogged through one of those periods where everything in your life sucks? That's what's going on with Joanna. Work? That project she began in March is still going on, but she's not getting paid for her work. She knows it's her fault -- the way she wrote the contract, she could bill for 500 hours. She recently hit that 500 hour mark, but the job's not done. So she's still working on it and too busy to take another, paying job. Consequently she's really broke this month. Home? Her 14-year-old cat is losing weight and has intestinal trouble. Joanna and the vet are working together to keep her stable and comfortable, but the fact is: her cat is dying. Friends? The first friend she made when she came to Chicago in 2005 died last week. They weren't really close anymore, and so a nice patina of guilt is spread over the grief. We were supposed to get together Saturday night, but she can't make it -- too broke. (I'm secretly relieved because I'm broke this month, too.)

Saddest. I haven't heard from my friend, Barb, for a while. As May slid into June, I thought she was busy preparing their home for sale. That had been the plan: to sell their house this summer and move into their beautiful new home in Hilton Head. She's lived in her current home for more than 20 years, so there's a lot of stuff to get rid of. I know she was planning on throwing a massive yard sale and had engaged an auction house. So I interpreted her silence as busyness.

Over the past 8 weeks, both she and her husband have had significant health problems. Hers landed her in the hospital over Memorial Day weekend, and her husband has been so ill as he battles cancer that he's been moved to a rehabilitation center.

Her husband is dying. I don't believe they will ever live as a couple in that beautiful new home in Hilton Head. It's heartbreaking.

After talking to Nancy, Joanna and Barb, I'm suddenly grateful to be dull!

Image courtesy of jk1991 at FreeDigitalPhotos.net

WWW.WEDNESDAY asks three questions to prompt you to speak bookishly. To participate, and to see how other book lovers responded, click here.

1. What are you currently reading? Jackie's Girl, by Kathy McKeon. A 19-year-old Irish lass lands on our shores and lands a job as personal assistant to the former First Lady. She's there as Jacqueline Kennedy becomes Jackie O. She becomes so ubiquitous that Rose Kennedy begins to refer to her simply as "Jackie's girl."

I just started this charming book, but so far it reminds me of the movie Brooklyn ... if young Ellis had ended up instead at 1040 Fifth Avenue.

2. What did you recently finish reading? Stories I Only Tell My Friends by Rob Lowe. More serious and far more entertaining than I anticipated. It's cliche, I know, but Rob Lowe really is "more than just a pretty face." On these pages, he's revealed himself as disarmingly candid.

I came to be fascinated by his mother, Barbara. Though he was a child actor, she was not a stage mother. She referred to rehearsals as "practices" and auditions as "try outs," and spent as much time/attention on her other sons' soccer and baseball as she did Rob's commercials and TV shows. She was clearly and admirably more interested in watching her sons express themselves than she was in financial success. She was also imaginative, creative, high strung and batshit crazy. There's an especially harrowing scene where Rob brings his new girl home -- she being Princess Stephanie of Monaco -- only to find his mother having a breakdown. Mom insisted to Rob and Stephanie that she was being driven crazy by her husband, who was shaping her Kleenex into voodoo dolls.

He writes of his mother with a moving mix of appreciation, exasperation, sympathy and love. Early on in the book, Lowe recounts that he couldn't even get an audition for Ordinary People. That's too bad. For while Tim Hutton was wonderful as Conrad Jarrett, it's clear that Rob Lowe has always known a thing or two about pretending everything is just fine and insisting that there's nothing to see here.

3.  What will you read next? I've got some mysteries vying for my attention.