1) Who's the Boss? is a sitcom that ran from 1984 to 1992. Were you a fan? I know I watched it, but I recall little about any specific episode. I just remember thinking it was a nice, extended family to spend time with at the moment when my own family was fracturing.

2) This week's song was composed by the show's producers, two men not known as songwriters. Have you ever tried your hand at songwriting? No.

3) The lyrics tell us that, as we go through life, it's not uncommon to "lose a dream or two." Do you agree? Have you ever had to give up on a dream? Yes. I gave up on a romantic relationship after investing many (too many) years in it.

4) Who's the Boss? was about a highly-paid executive who hires a housekeeper. In the 1980s, it was unusual because the exec was a woman and the housekeeper was a man. Do you believe a man can be as good at housework as a woman? Any man would likely be better than I am! I hate housework and am very challenged domestically.

5) Though the show's star, Tony Danza, graduated from University of Dubuque and was prepared to be a teacher, he got sidetracked. Back in New York, he boxed and tended bar and fell into acting. He finally did teach in 2010, taking over a 10th grade English class. How many different occupations have you held? Two: Administrative assistant and advertising copywriter.

6) On the show, his daughter was played by Alyssa Milano. When she was a teenager, she rebelled against the show's producers by cutting off her long hair and wearing a pixie style. Were you a rebellious teen? I had my moments. I believe all teens do. It's the natural order of things.

7) "The Boss" was Judith Light, who had been known to TV audiences from her work on One Life to Live. She met Robert Desiderio on the set of the soap opera and they have been married more than 34 years. Tell us where one of your romances got started. One of my coworkers and I felt a spark between us. So in a way, we were thrilled when the company got bought, we all lost our jobs ... and we were free to fall in love! 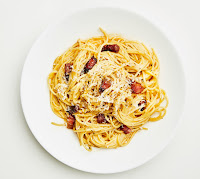 8) The show -- rebroadcast with subtitles -- was a hit in Italy, where it was known as Casalingo Superpiù (Super Housekeeper). Say something to us in Italian. Carbonara!


9) Random question -- Have you more recently watched the sun rise or set? Sunset. My living room window faces west, so if I'm home, I see it.

Today's happiness -- I have to admit it's getting better. I went to the chiropractor today and, aside from a little stiffness, he said I appeared "fine." And, except for a little creakiness when I get up after sitting too long, I feel fine.

This adventure -- leg cramps and sudden stabbing pains and misdiagnoses -- began very nearly a year ago. It was scary and frustrating and time consuming and, oh yeah, painful! But now  I have a diagnosis (spinal stenosis) and a course of treatment (chiropractic adjustment and massage) and I am happy.

And hopeful that, as we bid adieu to 2019, I will end my monthly trips to the doctor.

I am careful with this blog. None of my family or close friends knows about it, and their names have all been changed so even if they did a search, they wouldn't find it. The goal here is self-expression, and sharing, but not to hurt anyone.

I wish I could say the same for Reg. My dear friend Henry's husband. He wields social media like a club and overshares, at least once a week, about how miserable life has been since Henry's accident. Instead of a blog, or even just his Facebook page, where he could control access, he announces his disappointment, depression and rage on the Gofundme page he set up to help pay for Henry's bills. Google Henry's name -- and people might, since he's a published author -- and the Gofundme page is one of the first listings. No one contributes anymore, haven't for months and months. But we all get alerts when Reg posts an update. So we can all read about how mean Henry has been, the insensitivity of  friends like me and Patrick, how self-centered the members of Henry's creative writing group are.

I understand Reg's need to share. Not his need to call Henry's friends out. And not to air Henry's dirty linens. I have known Henry for decades and am very, very sure he would find this a terrible breach of trust. I'm certain he has an expectation of privacy regarding what goes on with his husband in their home. I worry about the betrayal. Months ago I mentioned this to Reg. He said, "I don't care. I can't care." His need to reach a wide audience with his suffering is that great.

Today's update begins: "I feel a need to relate everything I am feeling towards Henry. I hope he never sees this. At least not until he is better."

I hope he never sees it. Ever. I think it would shatter his already wounded heart.