Today's Happiness: Cousin Rose. I have received two letters from her this week. She loves me very much and has always been there for me. I should treasure her more! 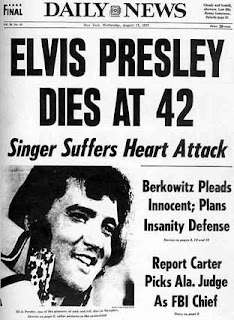 
Next week is the 35th anniversary of Elvis Presley's death. Here's a snapshot of what the world looked like in mid-August 1977, when he left it:

1) The King replaced The Son of Sam as everyone's #1 topic of conversation. Till then, David Berkowits' summertime reign of terror had New York and the nation riveted.

2) Jimmy Carter was President, advised by his Cabinet (including Secretary of State Cyrus Vance and Attorney General Griffin Bell)

3) Wall Street was nervous about Carter and his new SEC regulations, causing stocks to dip precipitously.

4) Judge William H. Webster was about to nominated for the head of the FBI, a position he'd hold for 9 years.

5) Dr. Carl Sagan, America's best-known scientist, graced the cover of Newsweek in a story called, "Seeking Other Worlds," which detailed his efforts to bolster support for the space program. There was no internet, no blogosphere, so the cover of a major magazine was influential. 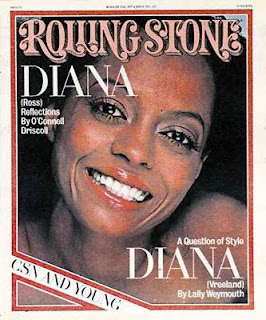 6) My Chicago Cubs were in first place in the NL East! (We may have finished out of the money, but in mid-August, we still were at the top of the heap.)

8) Shaun Cassidy was setting young girls' hearts aflutter in Tiger Beat. His Hardy Boys TV show had premiered as a mid-season replacement a few months earlier and he succeeded his older brother, David, as #1 teen dream

9) Olivia Newton John was on two magazine covers -- US and Ladies Home Journal -- because she was promoting her summer mega hit, Grease 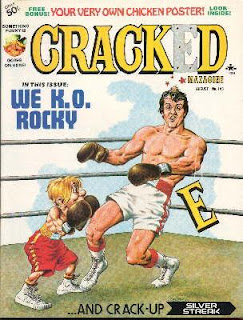 13) Everyone was reading about Meggie and Father Ralph in The Thorn Birds.

I want the weekend to get here! I made a math error at work and it was caught today. By the client, on their second round of legal review.* As a copywriter, I'm not really responsible for the math but I've been doing it for a long time anyway and my coworker trusted me instead of checking my work. Well, today all hell broke loose. I feel terrible.

Fake it till you make it 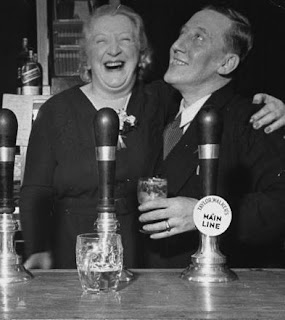 To see me today, you'd think I was the happiest woman in the world. I cracked wise and laughed at my officemates' jokes. Even went to lunch with one of them. Was very chatty, mostly about the wonderful old movies being shown on TCM's Summer Under the Stars.* It made the day go by faster.

I am not happy these days. The Cubs have been trading away my favorite players (less than 6 of the guys on the roster on Opening Day remain). I share an office with three (3!) other people. I'm not enjoying the work anymore and don't understand my boss. I'm worried about my best friend. The news (with all this gun violence) is unremittingly depressing. When I get home, all I do is nap.

But I refuse to feel this way forever! While unhappy about the Cub trades, I get it: we're rebuilding. While unhappy about my job, there is nothing I can do about it right now beyond keeping my options open through freelance. (Yes, the market is still that tight.) And my best friend? All I can do is love him.

So all I can do is pretend to be happy, or I guess, put myself in a happier state of mind. One of these days the happy will naturally emanate from my heart and not be forced from my head. I know it will. But for now, this is what I've got.

*I'll have two SUTS blogathon entries! One about the elegant James Mason and the other in praise of our only King, Elvis. Watch for them. They were a delight to do.
Posted by The Gal Herself at 8/08/2012 12:11:00 AM 3 comments: