A photo of my raging soul 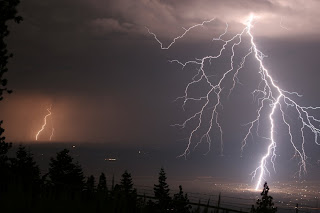 Never mind the forecast, for the sky had lost control
Cause the fury and the broken thunder's come to match my raging soul

That's from "Stoney End." Laura Nyro wrote the song, Barbra Streisand sang it (and knocked it clear out of the park). And it describes how I felt this afternoon PERFECTLY.

I called my doctor's office first thing this AM and asked to be called when my test results came in. The receptionist told me that my doctor was on vacation all week, but his nurse would call me. I sat by the phone all day. Worrying, stressing, wondering ...

Then at 4:00 I called again and got a different receptionist. This one spoke to me as if I was mentally challenged. The nurse would not be calling me with test results because she's not qualified to do that. (The "duh" was unspoken but implied.) I said I needed to talk to someone, because there's no way I want to wait for a week to hear the results. The nurse was really, really busy, but she'd call me before she went home to discuss this. I left my number and the receptionist said, "Your (previous) message is right here."

I waited until 6:00, called back and got the service. THE BITCHES HAD GONE HOME! Neither the receptionist nor the mysterious nurse were available. If you were standing close enough, you could have heard the thunder clap deep in my soul. I want my test results.

My oldest friend is on vacation in California this week but graciously offered to have one of the doctors in the practice she manages (here in Chicagoland) read the report and get back to me. I also called my internist. I explained that my OB-GYN will be out of town this week and asked if she could help me. I was told by both my oldest friend and my internist that that hideous nurse will have to fax the info to one these two doctors, and because of the strict privacy laws, I may have to sign permission.

Whatever. I want my test results.

I don't know if I'm primarily angry with a soupcon of scared or if I'm terrified with a thin patina of livid. Whichever it is, it's an uncomfortable feeling and I really, really want to yell at someone right now.

When she was bad she was horrid

As July 31 approaches, I was hoping to announce a super-duper weight loss in the counter at right. Alas, I don't think it's going to happen.

I'm confident I'll meet my exercise goal of at least 3 workouts per week. I have stuck to my diet of 1891 calories for 22 of the last 27 days. So what's the problem?

When I go off t

hat diet of 1891, I REALLY go off it. One day I went off the rails by almost 1000 calories. Yes, it was a birthday celebration, a special occasion, and I enjoyed it thoroughly. But days like that (and coconut creme cake like this) have gotten in the way of my goals.

Oh well, this isn't a short-term diet, it's a long-term lifestyle change. I may slip up now and then. (Hopefully less often as I get more accustomed to watching what I eat.) Staying on my diet 80% of the time is better for my body than blowing it off altogether, and by maintaining my fitness schedule I am helping my heart. It's not a total wash. I just have to stick with it!
Posted by The Gal Herself at 7/27/2009 01:45:00 PM 2 comments: Links to this post

ON THE ROAD
Movies about getting from Point A to Point B and the humor/drama/horror that occurs along the way.

Damn those Bumbles! They already named the two that immediately popped into my head, the two I love best: Little Miss Sunshine and Thelma and Louise. But it's a pretty loosely defined genre, so I have come up with a trio of others.

Rain Man. Two brothers who barely know each other take off together. I guess, technically speaking, the younger brother actually kidnaps the older one. By the time they travel across country and end up in court, the younger brother learns to appreciate and accept his older brother, and possibly even forgive their father. Dustin Hoffman won an Oscar for this movie, but I think it has one of Tom Cruise's best performances.

The Road to Perdition. Tom Hanks puts a sincere, earnest, hard-working face on crime. After a hit goes very wrong, he takes off with his son -- trying to "fix" things with the mob he's involved with while trying to establish a good, clean, new life for his only remaining child. The movie is a serious mix of affection, tension and moral ambiguity, with lots of subtle and not-so-subtle messages about the bond between parent and child. It also has pair of fine performances by Jude Law and Paul Newman.

The Wizard of Oz. It is SO a road movie! A yellow brick road movie, to be exact. Dorothy and Toto are joined by a trio of colorful traveling companions and they learn much about each other along the way. With repeated viewings, I have come to appreciate the outsized courage of Toto so much more. That little fella rocked!

Naturally I called my doctor's office first thing this morning to let him know I'll be available all day on my cell. The thing of it is, though, he's on vacation this week! I told the receptionist I want to hear from the nurse the moment my test results come in. I explained what the tests were, hoping to appeal to empathy and sisterhood.

I've also sent up flares to my best friend that now would be a good time to come to the aid of this ol' gal.

I wish the Cubs were playing this afternoon instead of tonight. I wish we'd gotten an enormous, high-profile, high-stress project this morning.