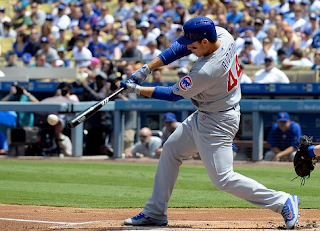 It was positively ridiculous how worried I was about him. Was he hurt? Were he and girlfriend Emily on the outs? The Cubs' team shrink died suddenly -- though it was after his slump began, I was worried that it exacerbated the problem, whatever problem he was having.

I cannot stand it when he's not doing well.
He's such a great kid. He not only hits for power, he patiently takes his walks. He's a solid and dependable first baseman. He works with pediatric cancer patients. He reached out to the Parkland survivors after the shooting at his alma mater, Marjorey Stoneman Douglas high school. Someone like Anthony Rizzo only deserves good things.

I'm so glad that he's going into the All Star break hitting 6-10. This old heart of mine couldn't take it if his slump continued!