To paraphrase my favorite joke, when you see a lot of horseshit, you should search for the pony. As he has been for nearly a decade, Anthony Rizzo is my favorite-most pony. 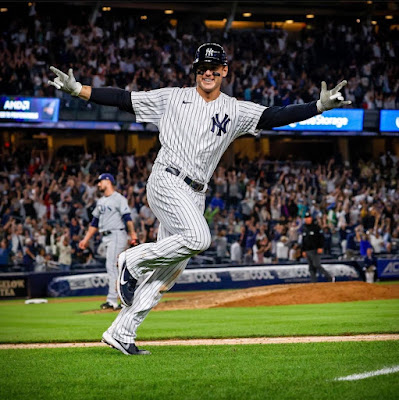 This week, he raised more than $800,000 with his Swing for the Fences auction. The funds will help families dealing with pediatric cancer.

The money goes to gas cards, so parents can afford the drive to the best -- and often faraway -- facility for their child's chemo.

And parking! I didn't realize this until Rizz educated me, but many hospitals charge patients for parking. A week of chemo can cost a family $70 or more, and that's not reimbursed by insurance. Neither is eating at the hospital cafeteria (another $50/week, per person.) When you consider that many parents are on unpaid leave from their jobs, these costs add up fast and can be crippling.

Which is why he's made rent/mortgage assistance available.

In Chicago this year, pediatric cancer patients spent the day with their siblings at Santa's Village. In New York, the kids got gift cards for their own mini-spree at FAO Schwartz' flagship store.

Oh yeah, and there's his baseball. You know, his real job. I hated to lose him, but he's flourishing with the first-place Yankees. It's not even the All-Star Break yet and he's got 57 RBIs! His slugging percentage is .502. It's been years since his SLG has been this high.

Sometimes it's hard to be happy about the way things are going in this country. According to 538, a staggering 40% of Americans still view insurrectionist-in-chief Donald Trump "favorably." (No, really.) Peacefully take a knee, like Colin Kaepernick, and you deserve to lose your livelihood. Plan an attack on The Capitol from the Oval Office, and we'll re-elect you!

Three Supreme Court nominees took an oath as they began their confirmation hearings and then lied about Roe. Voters who cosset themselves in my Christian faith are good with this, too. I guess I missed the week in Sunday School when they taught us how the ends justify the means.

It's become fashionable to blame the police in Uvalde and the parents of the Highland Park shooter for the latest mass shootings. While it's true that the police and the parents failed, it completely misses the fact that both shooters bought high-powered AR rifles legally. The most immediate problem at hand is not police procedure or filial fuck-up, it's allowing civilians to have combat rifles.

The economy has always risen and fallen. It's cyclical and has less to do with the President or Governor than many of us believe. That's why dollar cost averaging works when we invest. But this moral decay? It's obvious to me on whose shoulders this rests. And it's such a ridiculous cyclical argument! "I love the Constitution but I'll look the other way if it's my guy shredding it. I want to protect the unborn but I'm OK with school children being shot. BUT GAS PRICES! NOW I'M MAD!" How corrupt is that?

Which is why I cling to this. 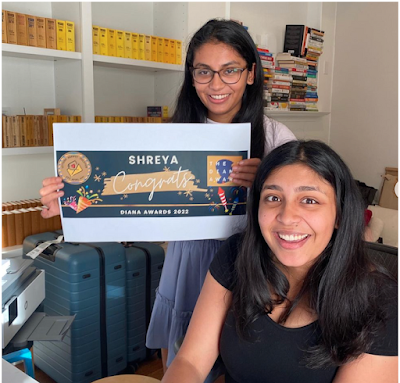 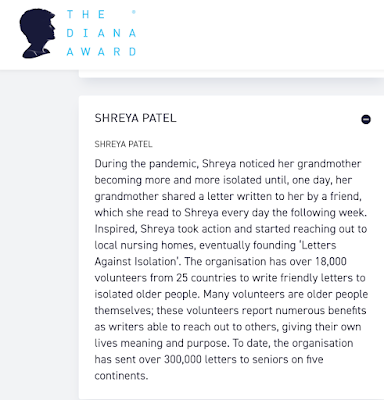 The Diana Award was founded by former Prime Minister Gordon Brown and other British politicians to honor the late Princess of Wales, and it's based on her belief that young people have the power to change their communities and our world. It's the most prestigious award someone aged 9-25 can receive. Princes William and Harry participate in the annual celebration.

20-year-old Shreya Patel is the Massachusetts-based founder of Letters Against Isolation. For two years now, she and her kid sister Saffron have been facilitating correspondence with people in nursing homes, seniors that feel forgotten. Today it's a massive organization, with a sophisticated signup process that makes it easy for you (yes, you!) to find a senior in your state who needs to hear from you. Too broke for postage? These brilliant girls have established a stamp fund.

The link I get from Letters Against Isolation is a highlight of my Sunday. I know that by signing up to write, I am improving two lives: the person who receives my letter and, of course, my own. Supporting Shreya and Saffron, reaching out and alleviating loneliness ... these things brings me closer to God and give me hope at a time when I need it.

Here's that link again for Letters Against Isolation. (Hint, hint.) I first found out about LAI from Bev at Funny the World. Thank you, Bev!