My 2021 nail color is Essie Mrs. Always-Right. One of the beauty sites calls it a "fierce terracotta rose pink cream nail polish." I like it because it doesn't chip and looks good with both my blue and black sandals.

This year Mrs. Always-Right didn't venture very far into the Atlantic Ocean. The first three days I was there (Wednesday through Friday), the temperature didn't make it past 75º. I love that sunny, warm-but-not-hot weather but it didn't inspire to me go running into the sea.

No one else seemed so inspired, either. Here's the scene by the Southernmost Beach Resort. You'll see chairs as close to the water as possible, but not a single soul wading in. 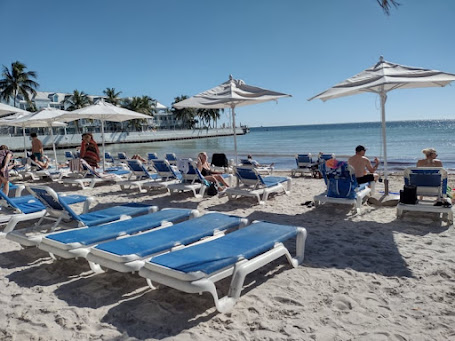 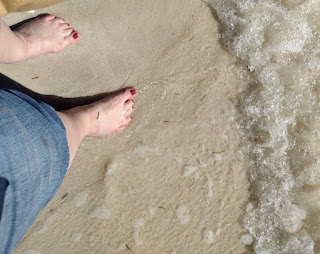 But I'm my own girl. I rolled up my jeans and let my toes experience the salt water and sand. I also think this is where I got a bug bite. For some reason, I'm always the one who gets bit. I get raised bumps and this one ended up developing into a bloody rash. (Don't worry, I didn't memorialize it with a photo.) Not painful, really. Just itchy and I was glad it was covered by one of the straps of my sandals.

On Christmas Day, we had something of a Christmas miracle and the mercury rose close to 80º. It gave me a chance to put on my suit and take Mrs. Always-Right to the hotel pool. 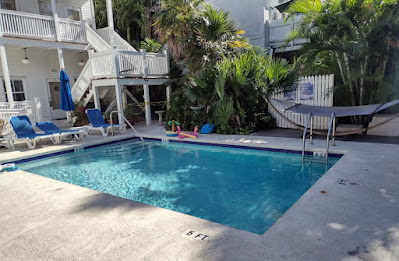 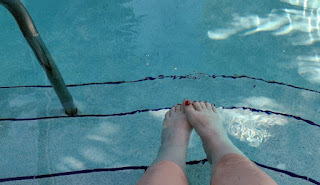 I like snow. In the winter, it feels right and natural. But I want to remember doing the backstroke on Christmas morning and seeing the sun bearing down on me through leaves and fronds. For people in Key West, this is right and natural, too. And it's all beautiful.

December 22 was Henry's 59th birthday. I'm glad I arrived in Key West in time to celebrate with him. He's been quite lonely since he left his job at the library last spring. I hope my presence made him feel a little less alone.

Henry and their friend Patrick met my flight. (Very smooth, non-stop!) Henry's husband Reg was waiting in the car. He dropped us off at my hotel and then went back to work, promising to pick us up in time for dinner at Henry's favorite restaurant.

We had a nice lunch. Henry seemed to be in good spirits, even though he was unhappy about turning 60. Understandable, I suppose, except that he's not 60. I know because I'm 64 and he's 5 years younger. I asked him for his drivers license and showed him he was born in 1962. He says it "doesn't matter" because he "feels 60." Oh, Henry. This is just a taste of what our visit would be like.

But still, Henry was happy with his present. I got him a mug, personalized with a photo of him, Reg and his dear friend Sherry. I explained it was to remind him of how much love he has in his life. I also gave him a $25 gift card to Banana Republic. There's a factory outlet store on Duval. I knew Henry wouldn't have purchased a Christmas present for Reg and I thought picking something up at the pre-Christmas sale would cheer him up. Henry chose a gold polo, explaining that Reg only wears black and Henry was sure he'd look handsome in the brighter color. I thought that was so romantic, after all these years and all they have been through, that he likes how his husband looks in lighter and brighter shades.

Dinner was fine. I thought Henry was drinking too much -- he had two pinot grigios with lunch and another two at dinner! -- but he seemed happy, if a little subdued. Henry was sitting at one side of the table between Reg and Sherry. I was happy to be sitting with Patrick. He's a smart man who makes me laugh.

After dinner I went back to my room and decorated for Christmas. My Santa door hanger, plus a tiny nativity, a kitty ornament (because I missed Connie and Roy Hobbs) and a photo of me and my favorite grandpa. My aunt gave me the framed picture last month for my birthday and looking at it makes me happy. 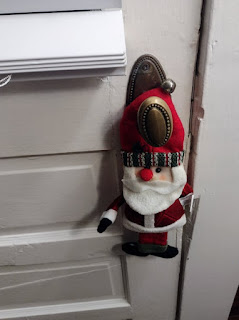 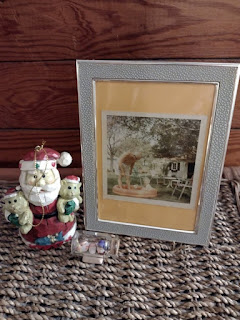