Today the axe came down. Again.

I was spared. Two unlucky -- and again, more expensive -- creatives felt the blade upon their necks.

I'm unhappy because one of them was not only a really good guy, he sat beside me and helped keep me anchored. Also this could mean extra work for me, and that's not a good thing.

I'm beginning to suspect that part of why they keep me around here is that I'm so cost-effective (aka "cheap"). At this stage in my career, maybe that's not a bad thing.

About the Oscar snafu

That clip of Warren Beatty and Faye Dunaway reading the wrong winner is turning into the Zapruder film of the new millennium. What happened? How could it have happened?

The accountant gave Warren the wrong envelope, that's how it happened. You're welcome. Next!

This is not to say I don't find this all fascinating. I'm just fixated on the backstage intrigue instead. For example, I looooove that Beatty wouldn't surrender the "wrong" envelope. Yes, that 79-year-old man in a tux was seen "tussling" with the accountant who gave him the "LaLa Land" envelope. You go.

Savvy old showbiz vet that he is, he appreciates that a Best Picture Oscar is worth millions to its studio and so this had to be corrected pronto. And that someone was going to be blamed for this -- after all, this potentially scandalous snafu was seen live by more than 65 million people all over the world. And he made sure that the someone who was blamed wasn't him. Atta boy!

And then there's Faye. She's an amazing actress. I saw her twenty years ago, onstage as Maria Callas in Master Class. It was a memorable night of theater. She was Mrs. Mulwray in Chinatown and Diana of Network. And yet she'll be remembered as Mommie Dearest and the old ditz who read the wrong name on the Oscars. 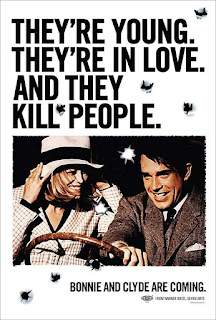 •  It was graphic -- but unlike Sam Peckinpah and Clint Eastwood movies of the same period, the violence is intentionally disturbing, not thrilling.

•  It was frankly sexual. For most of the film, Clyde is impotent, unable to achieve orgasm until he achieves fame.*

•  It was made outside the studio system. The poster at left is the original ... before the critics adored it and made it an international phenomenon. The movie made by 28-year-old pretty boy Beatty and his then unknown cast -- it was the first time audiences saw Gene Wilder, Gene Hackman and Estelle Parsons -- was going to just be dumped in drive-ins. For low-brows who still liked "gangster movies" and teenagers who'd be making out in the backseat and not really watching anyway.

But best of all, it was about something. It's about America, and our love affair with sex and violence and money.† I realize that The Godfather is a better movie, but the themes and even some scenes are direct from Bonnie and Clyde. Butch Cassidy, American Hustle, The Departed and this year's Hell or High Water all have very loud echoes of Bonnie and Clyde.

So I'm sorry that Envelopegate happened because it detracts from Bonnie and Clyde's 50th anniversary. It's a movie that should be seen by every new generation, because it's a film that matters.

*When I first saw it, I didn't understand that Warren Beatty was Hollywood's best-known and most legendary ladies man. So it confused me that the audience laughed when Bonnie tries to shame Clyde into making love to her, saying, "Your advertising's just dandy. Folks would never guess you don't have a thing to sell."

†Yet it's one of the most profitable movies ever made. Last I heard, Mr. Beatty alone has pocketed more than $50 million over the years as producer. Ironic when you consider the movie's subject matter.