1. Do you have/have you had any pets? Patience with critters is the best thing I inherited from my mother. When I lived at home, we had two parakeets, a turtle named Bobbie Jo, and always cats. As an adult, I've continued sharing my home with cats. Right now, I have Reynaldo and Connie.

2. Do you play video games? If so, do you have a favorite video game series? No.

3. Any unpopular opinions on anything? Yes. I know some of my more progressive friends are disappointed that I'm not participating in the Women's March on Saturday. It's not that I don't support their policy positions. It's that I refuse to protest Trump until he actually does something as President. Remember how ridiculous RWNJs were over Obama? They declared him a one-term President before he even took the oath of office. I insist on behaving better than the conservatives did eight years ago.

4. Do you have a favorite gem? If yes, has anyone ever bought you jewelry with that gem? I don't have a favorite gem. But I do have a pair of earrings my cousin Rose gave me -- pale blue parallelograms -- that I am terribly fond of, even though they probably have no monetary value.

5. Favorite story genres? I assume this means in books. Mostly I read mysteries and biographies. In movies, I prefer anything that's not fantasy or sci-fi.

6. What was once a secret that you can now share? (The original question was "What kind of fruit do you hate" which is type of question that I think "who cares?" so I just change them.) The only two answers that come to mind are a little too heavy for a Sunday morning. Let's just say I was ashamed and kept things secret that weren't my fault, and I'm not ashamed anymore.

8. What time is it for you now, what are you usually doing at this time of the day? 8:30. On weekdays, I'm putting on my makeup and slipping into my work clothes. Right now, on Sunday, I should be in the shower.

9. What character on TV or in film is most similar to you? You can go with looks or personality. Or you can make a quip and go to the next question. Suzanne Vale, Postcards from the Edge. I so relate to the mother-daughter scenes. Like Suzanne and Doris, my mother and I loved each other but we had a terrible time understanding one another.
via GIPHY 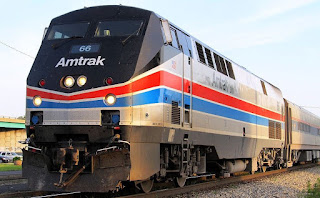 10. What's something weird you wanna do? It cannot be weirder than Mr. Watermelonhead. I'd like to pack a bag and go to Union Station. There I'll check the board and get on the next Amtrak out. I'd like to spend the night in a town I've never visited before, maybe even never heard of before. And I will do it without wearing a watermelon on my head.

11. Have you ever accomplished a New Years Resolution? No. But I'm hopeful about this year's. I want to report less credit card debt on December 31 than I had on January 1.
12. Is there any music artist you look up to? I'd love to be able to tell Streisand what she meant to me growing up. She didn't look like anyone else, she was ballsier than anyone else, and she was more successful than everyone else. She was a force at a time when women tended to be fluffy or silly. 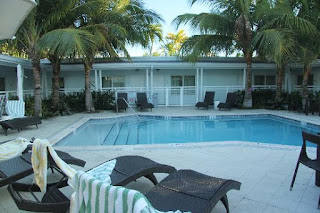 14. When was the last time you took a swim? Who else was with you? I last swam on Christmas Day. I was by myself in this little pool at the Orchid Key Inn in Key West. I splashed and swam as I listened to carols and looked up at the palm trees. Then, at 1:00, I joined my friends to celebrate the holiday.
15. Would you rather have the ability to sleep for as long as you want, or have the ability to never have to sleep? I wish I could feel refreshed without sleeping.

The World Has Lost Its Manners

I know I'm overreacting, but this is how I feel about a Saturday that went like this:

•  I'm in the crosswalk when "Don't Walk" begins to flash. A couple is eager to glide into a right turn but damn, there's my human body in their way. So they actually have to slow down. And the woman rolls down her window -- it was 28º -- to yell at me, "Don't walk when it says 'Don't Walk!'" Really? The light's still green but I'm supposed to turn around and run back to the curb? And that's worth shouting at a complete stranger?

•  The front desk woman at the hospital scolded me. Had my annual mammogram yesterday. Naturally I was nervous. Who isn't at least a little uncomfortable when preparing for a cancer screen. I arrived early so I could fill out the paperwork. The woman at the desk looked at me like I was in-fucking-sane. "When I made the appointment, I was told to come in early," I explained. Her response was a clipboard of forms, telling me the top one was mine to keep. She was getting her purse when I approached the desk and asked if her she didn't need me to witness me signing it where is said "witnessed by."

"I'll sign it later," she said, heading for the door. "When you're done, just leave your forms face down on the desk."

She was mad that I was early because she wanted to go to lunch!

I was completely alone in the clinic. So there was no to ask when I got to question about my mammogram. I just wrote "See doctor's order attached" and went behind her desk to get a paperclip.

Just then she returned with a Subway bag and a bad attitude. "What are you doing there? That's against the law. There's personal patient information back here!"

"I wanted a paperclip or stapler. You weren't here."

"Going back there is against the law."

I didn't mention that she wasn't all that concerned about my privacy when she told me just leave my forms "face down on the desk." I did say that I kept getting snapped at "for trying to do what you tell me to do."

I've been getting my exams done there for years and they do a good job, so I don't want to change providers because of this. However, I am toying with sending a letter to the facility. Sure she was rude, but more than that, I'm sure the lawbreaker was the hospital worker who left a patient alone in the office with all that personal patient information.

Ah, but at least I had movie group. My movie Meet-Up is always a communal good time, right? And last night it was, until the end. I was wearing my CUBS fleece because the theater is always a little chilly. After the discussion, when we were all filing out, a woman I really didn't know complimented my shirt.

"I'm gonna keep wearing Cub gear as long as I can to keep the party going," I said.

"You enjoy it," she said, continuing the conversation, even though her husband seemed in a hurry to leave. "You keep having fun. You deserve it after 108 years."

"Especially because you'll have to wait another 108 years," her husband sneered.

"Or eight months," I snapped. His wife shrugged, embarrassed.

Really, Mr. Man? You're impatient so you have to rip on my guys and ruin my happy MeetUp buzz?

Oh yeah, and someone was snarky about the Saturday 9 questions.  Sorry I'm not a writer of the caliber you require for your Saturday morning questions, lady. Get over yourself.

The Sound of No Music 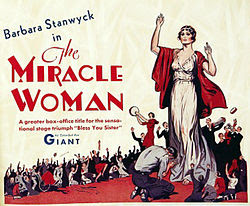 Last night, my Movie Meet Up enjoyed a screening of 1931's Miracle Woman. I not only enjoyed it as a film, taken on its own merits, I appreciated it for its place in the canon of filmdom. It was an early talkie, early Frank Capra and early Barbara Stanwyck.

The story, about a shady radio evangelist redeemed by love, wasn't hard to relate to in today's world. Stanwyck's performance was good -- and I always appreciate watching her work in our Meet Up because our moderator, Will, is such a fan and his enthusiasm is infectious. And most interesting of all, for me, was the fact that the movie had no score.

I was told this wasn't really a creative decision on the part of Capra. His later films all had background music. Miracle Woman had no score because in 1931, it simply wasn't easy to do.

In retrospect, it was a good decision. 85 years later, without corny music swelling up, the movie seems less dated and more watchable.

It was also cool to see Joanna again for the first time in 2017. We really have to get together again. But I know the next two weeks are going to busy for me at work, and she said she'll be traveling for business, so I guess that will have to wait.