MACCA BY THE NUMBERS
June 18 is Paul McCartney's birthday, and I'm celebrating by devoting each of my June TT's to his life and his career.

1) At age 11, he was one of just 4 boys in his class who advanced to the Liverpool Institute for Boys, where he studied English and Art.

2) In 1956, when he was 14, his mother, Mary, died of breast cancer. This left Paul traumatized, but it also inspired him to self expression. As he has said, "I lost a mother and picked up a guitar."

3) The following year, in summer 1957, at age 15 he met some kid named Lennon at a local church picnic an 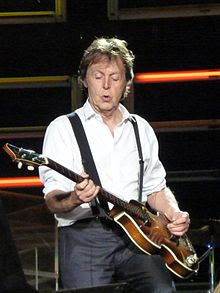 d together they changed the world.

4) Almost 200 of the 240 songs recorded by the Beatles are credited to Lennon-McCartney.

6) At age 28, the Beatles disbanded and he considered himself unemployed.

7) During his post-Beatle career, he won 6 more Grammy awards.

8) More than 350,000 fans in Brazil paid to see him in concert in 1989. Currently this is the record for tickets sold to a single musical event.

10) He and first wife Linda were married for 29 years.

11) Together they raised four children -- Heather, Mary, Stella and James

12) He has one child, Beatrice, 7, with his second wife, Heather. (The less said about Heather Mills, the better.)

13) A savvy businessman, his personal worth is estimated to be $290,000,000. It looks like a lot, but before the Recession and his expensive divorce from Heather Mills, he was worth nearly a billion.

Shine on me, Sunshine. Walk with me, World. It's a zippety do dah day!

I'm the happiest girl in the whole U.S.A.

My ticket cost more than I wanted but less than I feared.* Hopefully it won't be billed to my credit card until Friday. If not, well, I'll have to scramble a bit. But who needs to spend money on food when you have your very own most favorite Beatle right before your eyes within THE FRIENDLY CONFINES? I can live on enthusiasm.


*Tip: Reasonably priced scalper tickets are easier to get when you go as a single. Brokers have a harder time unloading them.
Posted by The Gal Herself at 6/15/2011 05:22:00 PM 3 comments:

This post was inspired by she over at a Kwee Life, who left a thoughtful comment about thinking of my friend's son the way I would a dog. This is far more compassionate that it may sound to the un-Gal-initiated, because I have infinitely more patience with pets than with people.

Yesterday I had a particularly tiring clash with a coworker that I tangle with regularly. Once again, she thinks I'm simply being difficult. Once again, I think she's being short-sighted. We talked, and talked and talked! My boss was in the meeting and could have ended the conversation immediately by taking a side (Any side! Please, just stop the madness!) but once again he was reluctant to make a decision. So we finally agreed on a compromise, but it was a lot more difficult than it needed to be, and it left me feeling bruised. I just want to do a good job for my client. If my boss had mediated, I would have gone along with whatever he said. But he wants everyone to love him, and one of us most definitely wouldn't have, so he sat back.

Anyway, after the meeting, I realized what was going on. My "adversary" has a huuuuge, high-profile presentation on Monday ... and she's scared. She knows she's in over her head, she knows she has to not only make a good impression on our client but on her boss, as well, and she completely lacks confidence. So what does she do? She returns to the familiar -- our not-so-huge, we-do-this-every-quarter project. And she over managed it ... and me. Because this is where she feels confident.

What does a dog do when frightened? She growls a bit as she scurries back to her favorite, familiar spot. On the bed. It always feels just right under her paws and always smells just as it should. Comforting.

So now, when I look at my coworker, I imagine that she has silky ears and doggy breath and I smile. I suppose that could be considered condescending, but it's better than strangling her.