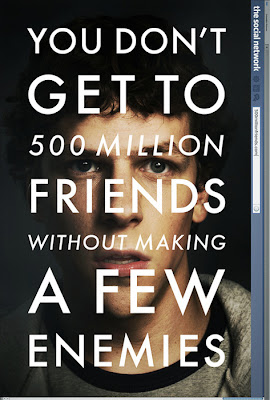 I have "friended" too many people who aren't friends. Both of my sisters read it. I know that exes have perused it ... and I have no right to be offended by that since I have snooped around there liberally myself.

So, while I don't overthink it, I freely admit that I try to present myself in a sunnier, sillier, more idealized light than you all see here. And I suspect most people who maintain a Facebook page can say the same thing.

It's reality, but stage-managed reality. And I'm no longer as comfortable with it as I once was. I mean, how valid a use of time is it to create and maintain an almost honest view of yourself for dozens (or hundreds) of people who are doing the same?

Part of it is my discontent comes from having just seen The Social Network. It's a terrific movie, but it's soul numbing. After all, it's about a duplicitous character who understands power and technology but not intimacy. Zuckerberg (as portrayed in the movie) seems to have ADD of the soul. As one who often toggles restlessly from window to window, application to application, on her laptop, I wonder if my own soul isn't suffering the impact, too.

It's become easier, faster and more comfortable to deal with acquaintances en masse with quick, superficial posts than to truly interact with the individuals in my life.

This is not good.

I know the problem isn't with the social networking technology. It's with the way (and why) I use it. I'm going to stick with Facebook because it's the wave of the future and I've got to get and keep a handle on it professionally. Along the way I hope I learn to love it personally, too.
Posted by The Gal Herself at 2/09/2011 01:30:00 PM No comments: