I'll remember this morning for a long time. I woke up and flipped on the TV. I heard a "breaking news" story about a shooter on campus at Western Illinois University, where my nephew is a student. The campus was on lockdown.

I told myself to stay calm. My landline phone hadn't rung overnight, and certainly if my nephew was in trouble I would have heard. I got to the kitchen, where my famished cats awaited me and my cell was charging. I figured I'd text my nephew as soon as I fed the cats.

I turned my phone on and saw lots of texts. Uh-oh! Someone had been trying to reach me overnight! But it wasn't my nephew.

•  My oldest friend (two hours earlier in Southern California) wanted to let me to know she's suddenly having unscheduled surgery. She's suffered with tenacious bladder issues forever now. She's on Medicare/Medicaid, and they have been slow to get her treatment. (The pandemic? The fires? The fact that she's not paying for it? I don't know.) Anyway, she got the word that they were ready to operate. Wednesday, aka today. With all her myriad medical problems, I'm worried that they aren't thinking of her care holistically. The whole "we got a bed, come on in!" thing makes me wonder if they've considered her pre-diabetes, her bipolar disorder, her heart and the way her meds interact. I know the surgery needs to be done, I just hope and pray the doctors are taking her care seriously.

•  John chose to text me overnight Tuesday because he didn't want to talk. (I do the same thing; I used to be famous for leaving boyfriends personal voicemails at the office when I knew they weren't there.) John wanted to explain why he's been incommunicado for nearly a week. My dear friend -- who is 65 and suffers from both diabetes and congenital heart trouble -- is "feeling rundown and monitoring symptoms." He doesn't have a fever, so that's good. But I bet he also still doesn't have a doctor -- I've been nagging him off and on since July -- which is why he didn't want to talk to me in real time. He knows I'll scold. 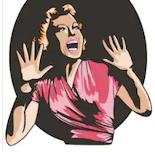 It was not yet 7:00 AM! Can you believe it? A shooting ... an operation ... a covid scare ... That's a lot of horror for first thing in the morning. I really wanted to toss my phone out the window so it couldn't hurt me anymore.

But I needed to check on my nephew. He got back to me right away (he's a good boy) and told me not to worry. Yes, it was his dorm where the shooting occurred. It was a roommate dispute between freshmen, settled with a gun! His RA pulled the fire alarm so everyone evacuated, and then the police shut the campus down. My nephew let it slip that, even though it was against covid protocol, he was crashing with his girlfriend in another dorm. GIRLFRIEND? I didn't know he had a girlfriend!

Love in the age of the corona virus.