In my next chapter, I'd either like to be a pet sitter or a Wrigley Field usher.

I get along with dogs and especially cats. I'd love to wander around town all afternoon, petting and walking and watering and playing.

And then, of course, there's the allure of The Friendly Confines. I'd be an usher for free in exchange for admission to the park.

We'll see which I'm doing a decade from now.

I've told this story before on this humble blog, and guess what! I'm telling it again! 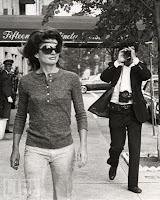 These photos were taken the same afternoon, moments apart, in autumn, 1971. The photographer who took the first shot and appears in the second shot is Ron Galella. He hounded Jackie on a daily basis, dressing up as Santa Claus to shoot her while shopping at Christmastime, hiding in coat racks for photos of her dining and sometimes even smoking (gasp!) with friends, chasing her in a speed boat while she water skied, following her into movie theaters, etc. When her children were young they still had Secret Service protection and she would ask the agents to, "Please smash his camera," and usually they would. It got so bad that in 1972, just months after this incident, she actually took him to court and got a restraining order. I often wonder what would have happened if Princess Diana had been as ballsy as JBKO; perhaps she'd still be with us.

It's a mess. I shouldn't be blogging, I should be straightening out the mass of paperwork that covers my dining room table and, thanks to the help of Reynaldo and Connie (who is learning some bad habits from Rey), has spilled onto the floor.

He's not MY captain

If you read this blog even casually, you know I'm a Cub fan. Or, as we Northside Faithful like to say, I bleed Cubbie Blue.

Therefore, I don't give a flying fuck about Derek Jeter.

The Cubs seldom play the Yankees. I cannot remember anything Jeter has ever done, either with his bat or glove, while facing The Cubs. I don't dislike the man. He has impressive numbers and I'm sure he's always been very good to his mother. But he quite literally means nothing to me.

Yet this morning I am positively assaulted with information about Jeter's performance in last night's All-Star game. I know he spoke to his teammates before the game and shook their hands when he left the field. I know he got an extra base hit. I know quite a splash was made by his girlfriend, who looks young enough to be his daughter.

New Yorkers, we're not all New Yorkers. Enjoy your iconic team. Honor your franchise player. But please, try to remember that there's a whole country west of the Hudson and we really don't care.