I was touched to read about the crowd who waited in the frigid weather to score tickets to see Barack Obama's final national address as President.

"The crowd in line Saturday mostly was a younger one, packed with college students, some of whom wore University of Chicago maroon or carried backpacks weighed down by textbooks. Families brought their young children, who sat in strollers padded with fleece blankets. Older couples wrapped quilts over each other’s shoulders, and little kids skipped in and out of line, their parents calling after them."

I keep trying to muster a modicum of enthusiasm about Trump. I'm a patriot, after all, and respect the electoral college and the peaceful transfer of power. Maybe the new President will pass the infrastructure bill that Obama could not and we'll have a renaissance of public transportation and a greener, safer country. But then I read his petty tweets about Arnold Schwarzenegger's ratings on The Apprentice and the derogatory way he refers to the Senate minority leader as a "clown" and my heart sinks.

Obviously we're going from a man of grace and intellect, who turned the other cheek and tried to rise above the indignities hurled his way, to a man who seems to revel in -- or at least is unable to resist -- the deplorable.

I don't want to give President Obama a halo he doesn't deserve. He wasn't perfect. I'm disappointed that Gitmo is still open, that we still don't have common sense federal gun laws, that apparently the VA is still as messed up as it was under George W. Bush*, that he couldn't figure out how to turn his public popularity into legislative success.

But I'm grateful for what he means to us here in Chicago. From Grant Park in 2004 to McCormick Place next week, he's made us proud and he's given us hope.

*That's when my uncle, a Vietnam vet, found nothing but roadblocks and dead ends when he needed help. No one who wore the uniform should be treated that way.
Posted by The Gal Herself at 1/07/2017 09:28:00 PM 1 comment:

1) This song is about a new day. Here we are celebrating a new year. What do you hope for in 2017? A little more serenity. More freedom from worry about health and finances.

2) Ms. Dion has said this song was influenced by the events of 9/11, and how a new day dawned after tragedy. Looking back on 2016, did something happen that you're glad to leave behind and move away from? All of it. 2016 was a tough year for me personally, politically, financially and physically. I'm happy to leave it all behind. Except of course for my WORLD SERIES CHAMPION CHICAGO CUBS! Thinking about my guys makes me so happy.

3) In the video, Celine serenades us from billowy white clouds. Describe the sky where you are as you answer these 9 questions. It's the middle of the night as I answer these, so it's pitch black out there. It's been so cold I haven't ventured far at lunchtime and it's dark when I get home from work, so these days I feel kinda like a mole girl. I must, MUST get out in the sun sometime Saturday.

4) This video was shot in West Palm Beach, FL. When settlers arrived in the late 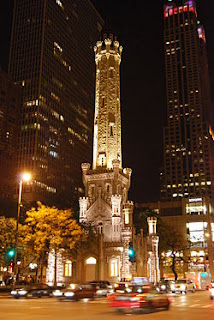 1870s, the town was called Lake Worth County. OK, your turn. Tell us something about your hometown. This is the old Chicago Water Tower. This tough old girl is the only public building to survive the Great Chicago Fire. It's amazing to consider everything that's gone on before her doorstep in the last 100+ years.

5) Celine Dion's native tongue is French. Dites-nous quelque chose en Français. I know "Je m'appelle Barbra" means "My Name is Barbra" because of an old Streisand album.
6) Celine's mother, Therese, is known in her Quebec neighborhood as a terrific cook. Think about your own domestic talents. Where do you excel? (Food prep, house cleaning, laundry, scheduling, etc.) I may hate doing laundry, but I am good at it. (Tip: Go to a Sally Beauty Supply and buy a bottle of clarifying shampoo. It's awesome for removing blood, food and grass stains.)

7) Growing up, Celine and her siblings often performed in her family's piano bar. Where did you most recently enjoy an adult beverage? I had a beer with lunch Friday at the pizza place next to my office building.

8) In 2002, when this song was popular, Kmart was in the news because the company filed for Chapter 11 bankruptcy protection. What department store to you shop at most often? Carson's. It may be called Bergner's or Yonker's in your neck of the woods.

9) Random question: It's time for a midnight snack and you have your choice of one of these three -- a slice of sausage pizza, a bagel with lox and cream cheese, or a piece of carrot cake. Which will you have? And what shall we bring you to drink? Oooh, I love lox! And a Coke. Thank you, Carson. (I've been watching Downton Abbey again.)